Floods, earthquakes and hurricanes are among some of the natural disasters that can rapidly destroy terrestrial-based communication infrastructures. In other situations, including conflict zones or terrorist activity, mobile telecommunications networks may either be switched off or become overwhelmed. 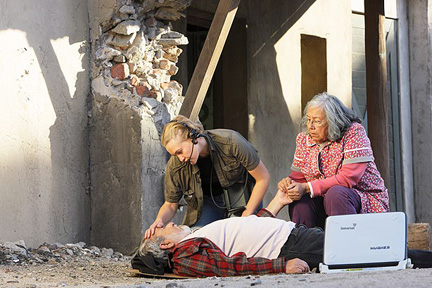 In all cases, alternative communications have to be quickly restored to enable aid agencies and authorities to access vital information, immediately and reliably, and provide effective coordination of relief efforts. Inevitably, crises can happen anywhere in the world—and for many rescue workers mobile, global-based satellite communications have become an essential component in their response strategy.

The ability to rapidly set up a broadband mobile command post in a temporary field office has now become a top priority for aid teams first on the scene. Delivering both voice and high-speed data access provides essential connectivity, almost immediately, enabling the effective coordination of welfare resources, while also improving response times, which could ultimately save lives.

Inmarsat has very strong relationships with aid agencies and first responders who operate at the frontline of disaster zones. As a trusted partner, it continues to develop a product and service portfolio based on their specific requirements. Many of the emergency teams deployed at short-notice characteristically equip themselves with highly portable, lightweight satellite terminals—typically BGAN terminals (Broadband Global Area Network). Possessing voice and data connectivity, and satellite phones, aid teams can respond immediately and effectively in the critical hours following a disaster.

Response Times
The capability to deploy mobile communications rapidly, where local communications are either poor or non-existent, means the first people on the scene can begin managing and coordinating search and rescue efforts, set up medical centres and oversee delivery of aid to survivors—helping to speed up response times, and ensuring the right assistance gets to the right place at the right time. 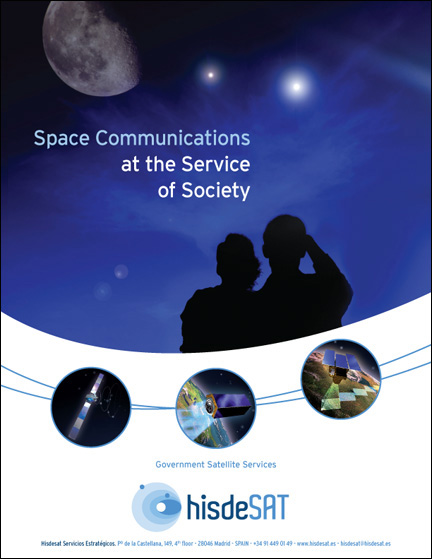 Fitting into a backpack and weighing just a couple of kilos, the ‘plug ‘n’ play’ BGAN terminal can be up and running in minutes—field workers don’t need any technical expertise to use the system, and connectivity is assured anywhere in the world. The rugged design of the terminals can withstand the challenges of extreme environments, and if responders need to move between locations they can use a vehicular terminal designed to create a mobile command post, allowing them to send status reports and make calls while on the move. The vehicular unit takes up minimal space in the car, with a discreet racking antenna mounted on the roof.

While agency-to-agency coordination is paramount, no less essential is allowing civilians to contact their friends and family. After listening to its customers, Inmarsat built support for social media into its satellite phone, allowing messages to be quickly sent anywhere in the world. Familiar to many, Twitter can be accessed on the IsatPhonePro with messages sent for the price of a SMS text, helping to reassure loved ones that they are safe, while also contributing to the wellbeing and welfare of local communities. For NGOs, this feature can create immediate awareness of their actions across the world.

All-Weather, All The Time
Inmarsat’s BGAN and IsatPhonePro operate in the L-band and, therefore, are true all-weather systems, unlike high-frequency satellite systems which can be disrupted by heavy rain or seismic activity. As a broadband mobile communications system, BGAN supports email, Internet, VPN and voice, providing connectivity between individual first responders, other mobile command posts and off-site teams.

Satellite Fleet-—Today + Tomorrow
Inmarsat can draw on its long experience of traffic requirements based on previous disaster responses. The 24/7 monitoring of its operations centre means it continually adapts and optimises the network, providing critical satellite communications capacity and network solutions to the government or first-response agencies. 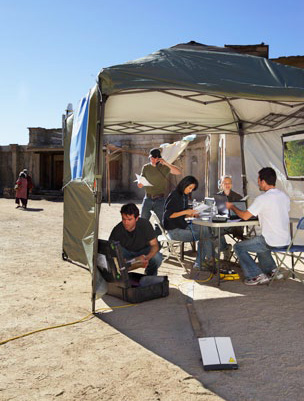 Emergency response situations typically create significant demand for Inmarsat’s services in a particular region, so the company manages its satellite and network resources to ensure that the increasing number of terminals being used is supported.

To accomplish this, the Inmarsat-4 (I-4) satellites-—among the most advanced commercial mobile communications spacecraft of their kind—generate hundreds of high-power spot beams. Each I-4 can generate 19 wide beams and more than 200 narrow spot-beams. Across the I-4 constellation, the spot-beams can be reconfigured and focused anywhere on Earth to provide extra capacity where needed.

To accomplish this, the Inmarsat-4 (I-4) satellites-—among the most advanced commercial mobile communications spacecraft of their kind—generate hundreds of high-power spot beams. Each I-4 can generate 19 wide beams and more than 200 narrow spot-beams. Across the I-4 constellation, the spot-beams can be reconfigured and focused anywhere on Earth to provide extra capacity where needed.

The I-4 series are 60 times more powerful than their predecessors. And, almost the size of a double-decker bus, the I-4 satellites set a new benchmark for mobile SATCOMs when first introduced, establishing the world's first global 3G network that delivers a wide portfolio of broadband services.

Inmarsat’s ongoing commitment to L-band services is demonstrated by its agreement with the European Space Agency (ESA) to become the commercial operator of the new Alphasat satellite. Built by Astrium, Alphasat is scheduled for launch in 2013 when it will supplement the I-4 series by providing additional L-band capacity for coverage of Europe, the Middle East and Africa.

Alphasat will be one of the world’s largest telecommunications satellites, providing increased capacity to handle more than 750 channels in the L-band, with improved quality particularly for satellite phone users.

Currently, the next-generation Inmarsat-5 (I-5) satellites are being built by U.S. manufacturer Boeing, based on its powerful 702HP platform and scheduled for launch in 2013 and 2014. The Inmarsat-5s will form the backbone of the new Inmarsat Global Xpress® network, offering significantly increased broadband downlink sand uplink speeds from compact terminals.

For the first time, and providing a complementary service to the L-band services, the I-5 series of Inmarsat satellites will use Ka-band to provide communication links for end-users.

Remote Possibilities
In helping prepare against future disasters, and allowing first responders to communicate humanitarian needs as quickly as possible, satellite-based environmental monitoring systems can be deployed to support relief programmes. Providing real-time data, and based on L-band resiliency for maintaining connections in extreme environmental conditions, the systems can alert authorities of an impending event ahead of time in order to implement emergency procedures and help reduce loss of life.

Télécoms Sans Frontiéres (TSF)
Inmarsat’s support for the humanitarian work of the charity, TSF, for example, includes equipment for their emergency teams tasked with restoring communications in the wake of man-made or natural disasters. TSF has been appointed by the United Nations (UN) to act as its principal communications provider in disaster situations, and it also supports the European Commission and non-governmental relief agencies.

In an emergency, TSF’s priority is to set up telcom centres to help coordinate first responders’ relief efforts and also enable survivors to call and reassure their loved-ones. The charity states that through Inmarsat’s support it is serving more than 200 organisations per year and tens of thousands of people in distress, providing them with the necessary contacts inside and outside their countries.

Supporting Reconstruction
Inmarsat has recently focused on delivering a new humanitarian aid package for NGOs and aid agencies tasked with the reconstruction following disasters. Unlike their first responder counterparts, these groups require a full suite of communications over extended periods. However, as with their counterparts in emergency response, they frequently have to operate in areas either without existing terrestrial communications or with seriously damaged infrastructure. In these situations, the need for broadband voice and data communications remains critical but budgets are often very restricted.

Covering both IsatPhone Pro and IsatPhone Link, these connectivity services have been packaged around the needs of the reconstruction team. 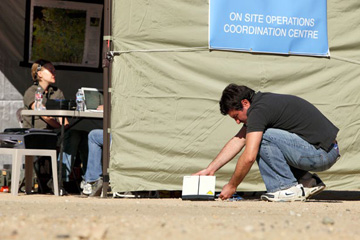 In receiving the award, Andrew Sukawaty, Chairman, said, “In a crisis situation, time is of the essence and an early, coordinated response is key to minimising the impact of any disaster. Mobile SATCOMs are therefore among a range of essential services for relief agencies in the initial days after a natural disaster, ensuring emergency services are deployed both quickly and reliably.”

As a long-standing ITU partner, Inmarsat has a proud history of supporting the relief effort across the world, and the award occupies a position of prominence at the company’s London headquarters.

About the author
Florian Lefèvre is head of business development for humanitarian aid agencies and NGOs.

Lightweight, portable and the size of a backpack, BGAN is portable broadband to go.

With BGAN, aid workers can create a temporary communications hub immediately, supporting site operations including all the applications needed for an ‘office’ in the field, covering voice, email, fax, web browsing, remote access to company networks and even video-conferencing.

Once set up, the system provides reliable back-up and mobile off-field communications for a variety of workers. For instance, first aiders can carry BGAN as they travel in the field, using it to communicate and work almost as effectively as they would from their offices, with secure access to networks through industry-standard VPN (virtual private networks) systems.

With a footprint roughly that of a laptop, a BGAN terminal is truly mobile. And as a powerful voice and data tool in its own right, emergency teams can use it for a wide range of tasks to support large-scale operations in the field, including sending status reports and photographs, coordinating operations and contacting other agencies by phone, email or via video link. 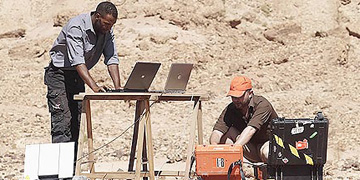 • Simultaneous voice and broadband data
• Rugged, laptop-sized terminals
• Works almost anywhere
• Highly reliable, whatever the weather
• Quick to set up and simple to use
• Supports all common office applications
• Cost-effective (pay per MB)
• Video-conferencing
• Data at up to 492kbps over standard IP
• Supports ISDN and IP-based networks.