On Thursday, May 28th, 2009, at 2:24 a.m. local time, a deadly earthquake rocked Honduras, killing seven people and injuring several others, demolishing homes, damaging scores of other buildings, and sending terrified residents running through the streets.

“I woke up immediately, and all I could do was hug my youngest son and pray,” says Dalia Martinez of San Pedro Sula, Honduras. “After a few minutes, my family and I went outside, where my neighbors were already gathered, likewise terrified about what happened but grateful we were all okay. Since then, we’ve been sleeping with flashlights and telephones within reach, because the aftershocks have been strong.” 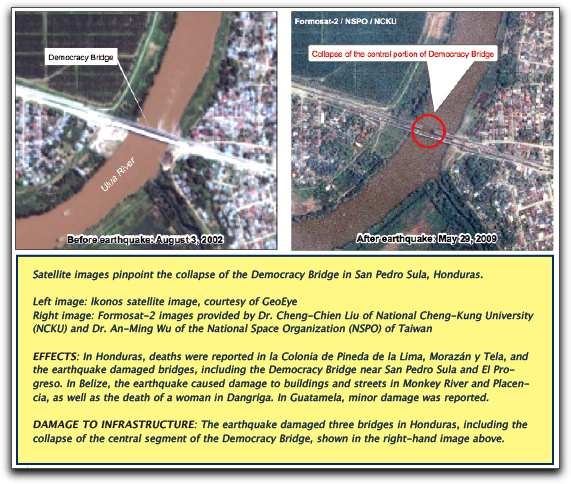 Fortunately for Martinez and other shaken residents, disaster officials knew exactly where to send help. A state-of-the-art Earth observation system called SERVIR1 directed them to the hardest hit areas.

Meaning “to serve” in Spanish, SERVIR is a joint effort of NASA, CATHALAC2, the U.S. Agency for International Development, the Regional Center for the Mapping of Resources for Development, and other partners. The system uses satellite imagery to zero in on places where a flood, fire, hurricane, or earthquake has left destruction in its wake. Team members combine satellite data with ground observations, and display a near real-time map of crisis points. At a glance, decision-makers can see the locations of most severe damage so they can send help in a hurry. 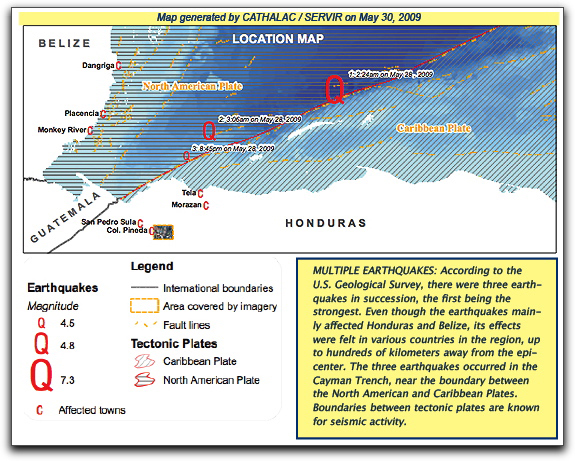 “The Honduras earthquake was a perfect example of SERVIR at its best,” says Emil Cherrington, Senior Scientist at SERVIR’s regional operational facility at CATHALAC in Panama. “It was like a chain reaction. People from agencies and organizations in several countries worked together after the earthquake to pinpoint precise locations where support was needed.”

Breaking news stories revealed that the worst infrastructural damage was restricted, in general, to Honduras and Belize, so the SERVIR team at CATHALAC began to assemble images and data for a bird’s eye view of those areas. They contacted Stuart Frye of NASA’s Goddard Space Flight Center and asked him to arrange satellite imagery.

The next day, Frye notified the team that the Taiwanese would image the hardest hit areas by using their Formosat-2 satellite. In fact, the Taiwanese were already in action.

Dr. Cheng-Chien Liu of the National Cheng-Kung University of Taiwan explains: “President Ma Ying-Jeou of Taiwan and his delegation were visiting Belize the night earthquake struck. As news of the quake spread across the Pacific, all Taiwanese were shocked and very anxious to confirm their safety and that of the people who lived in the countries hit.” 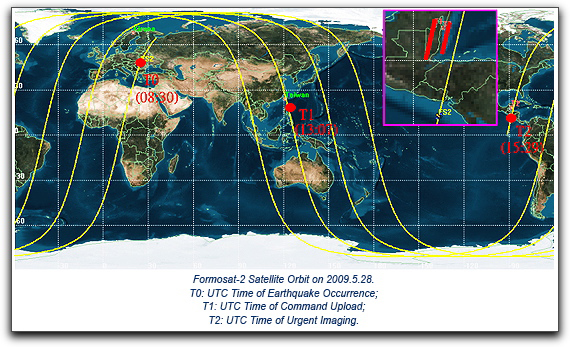 “We knew the fastest way to capture images of the disaster area would be to use Formosat-2. So I issued an urgent request for assistance to Dr. An-Ming Wu, the Deputy General Director of our National Space Organization. Even though it was the Dragon Boat holiday and all Taiwanese were enjoying their family reunion, Dr. Wu called the Formosat-2 mission operation team to rush back to the control center. The three critical images were taken in record time!” 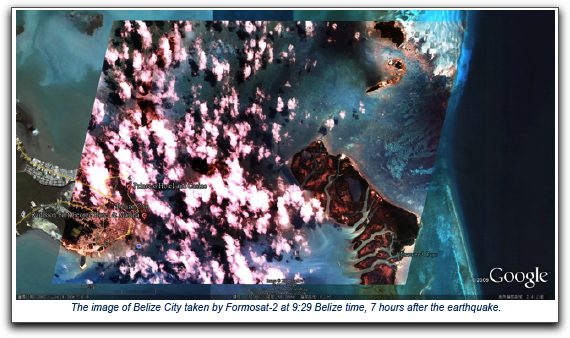 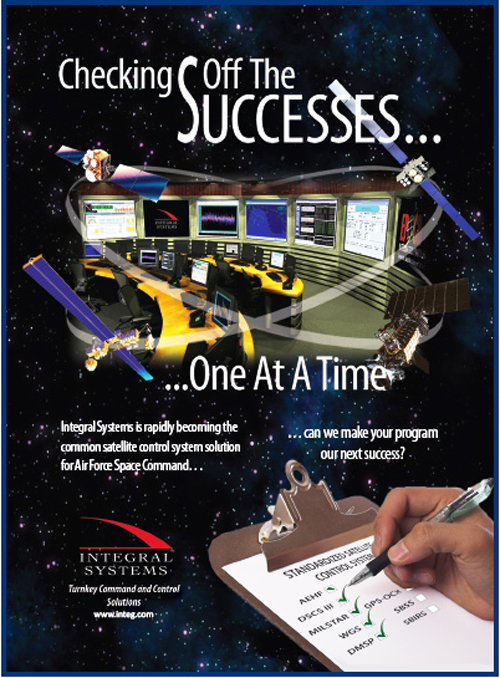 Dan Irwin, SERVIR Project Director at NASA’s Marshall Space Flight Center, recalls the lightning-fast response: “I was in a bus in Berlin when I received an email from Dr. Liu telling me they had the images ready to send. It was early Saturday morning in Panama, but I called and woke Emil [Cherrington] up anyway to let him know.”

“Dr. Liu was the one who lost sleep,” says Cherrington. “He stayed up until 2:00 a.m. Taiwan time sending the images to our servers at CATHALAC. The data volume was huge, so the transfer was slow, but he wouldn’t go home until he was sure we received all the images.”

The CATHALAC team processed more than 700 individual image fragments. At 1:21 a.m. on Sunday May 31st, they sent Spanish and English versions of their assessment map to Honduras’ national emergency management committee, the Red Cross, the United Nations Humanitarian Relief Network, and several other organizations vital to the relief efforts.5 These agencies then were able to focus their efforts exactly where they were needed.

“People from several different nations worked together to pull this off quickly and smoothly,” says Irwin. “It was a perfect example of why we at SERVIR say ‘we’re GEOSS6 in action.’” 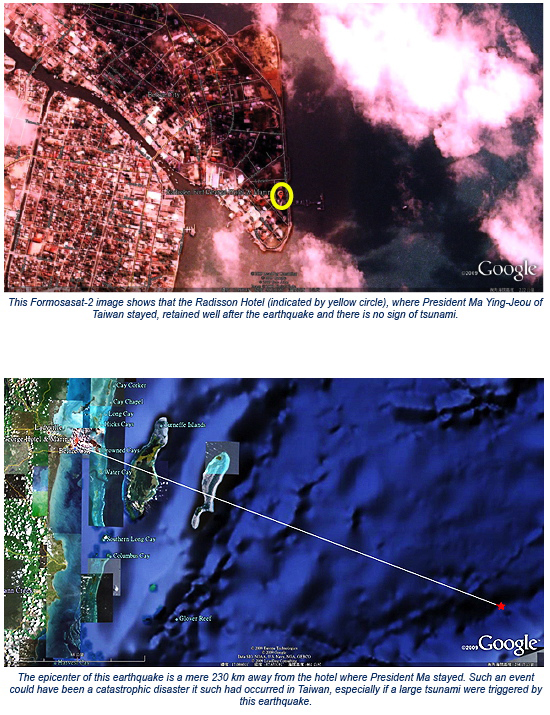 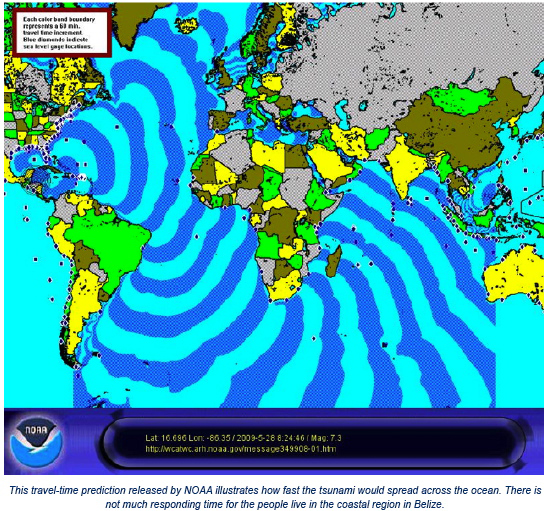 GEOSS, short for Global Earth Observation System of Systems, is a concept in progress to connect and pool several countries’ Earth observation tools and data for the benefit of all. It’s no wonder that the organization chose SERVIR in 2007 as a template--a sort of “poster child” for how to meet GEOSS goals. “This is the 24th time7 that disaster response has been provided to Mesoamerica and the Caribbean regions in the framework of SERVIR, and the 6th event in 2009 alone,” says Cherrington. “We also anticipate a busy Atlantic Hurricane Season. In fact, that season is already upon us.” “We’re ready,” say Cherrington and Irwin. 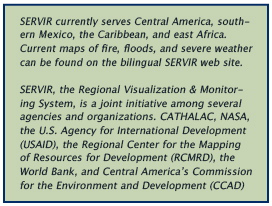 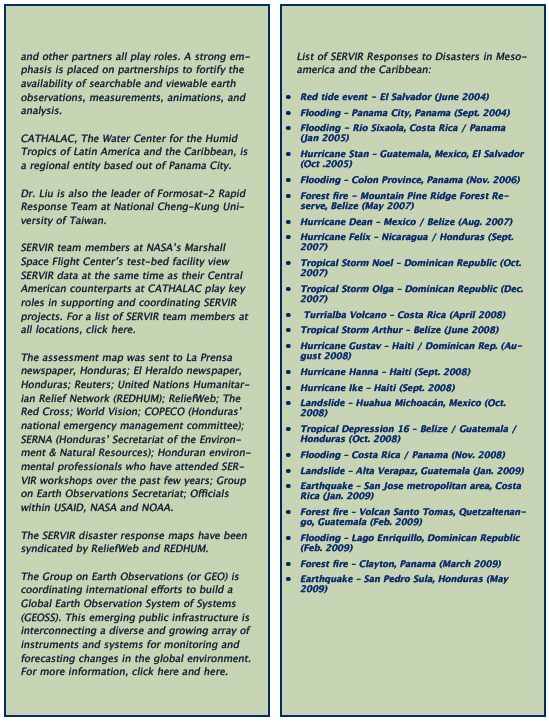