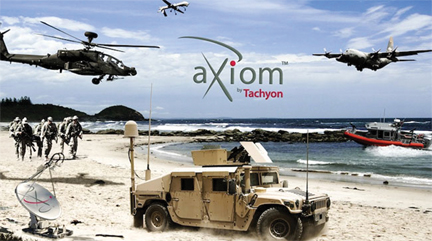 Tachyon was awarded the MARSS contract for airborne COTM systems supporting TFO. In fulfilling this contract, Tachyon identified and acquired the exclusive rights to satellites ideally suited for BLOS airborne communications, and even relocated one to cover both Afghanistan and Pakistan.

Tachyon designed and built the onboard system, integrating Tachyon’s aXiom 9300 Terminal with third party equipment, including an 18-inch satellite parabolic antenna, Antenna Control Unit (ACU) and satellite modem, aboard C-12 aircraft. Tachyon also designed, built and installed a completely redundant Earth station in Bagram, Afghanistan, which linked with its San Diego Network Operations Center (NOC) and the corresponding satellite equipment for the aircraft, enabling full remote monitoring, reporting and control. Tachyon’s solution almost doubled the original speed of the SATCOM link, which allowed for both SIGINT and live video to be transmitted simultaneously between aircraft and satellite and delivered in real time to monitoring stations around the world. 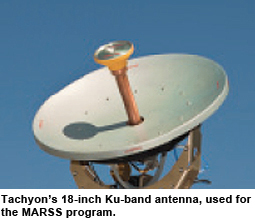 The deployment of a successful Airborne COTM Network relies on unwavering focus and dedication in executing each and every step of the total E2E solution:

About Tachyon
Tachyon was founded in 1997 and is headquartered in San Diego, California, from where the Company operates its world class Network Operations Center. Tachyon was the first 100 percent TCP/IP standards-compliant, carrier-grade, true satellite broadband network for the enterprise and government markets. With more than our 13 years of business, the Company has amassed a significant amount of engineering and operational expertise in delivering end-to-end satellite broadband communications solutions. We hold dozens of patents and maintain an important ongoing commitment to research and development.