Getting remote sensing data to the tactical edge at the speed of relevance is essential to support both military operations and disaster relief. Today, however, access time to retrieve satellite data is often measured in hours or even days.

Artistic rendition of SpaceLink satellites connecting to spacecraft in LEO, MEO and GEO, as well as aerial assets

A high bandwidth relay system with real-time continuous tasking uplink and data downlink can solve this problem and provide access to critical data in minutes to seconds, rather than hours.

Remote sensing satellites in LEO today can only download data or upload tasking commands when positioned over a ground station. Typically, this is limited to six percent or less of each orbit. 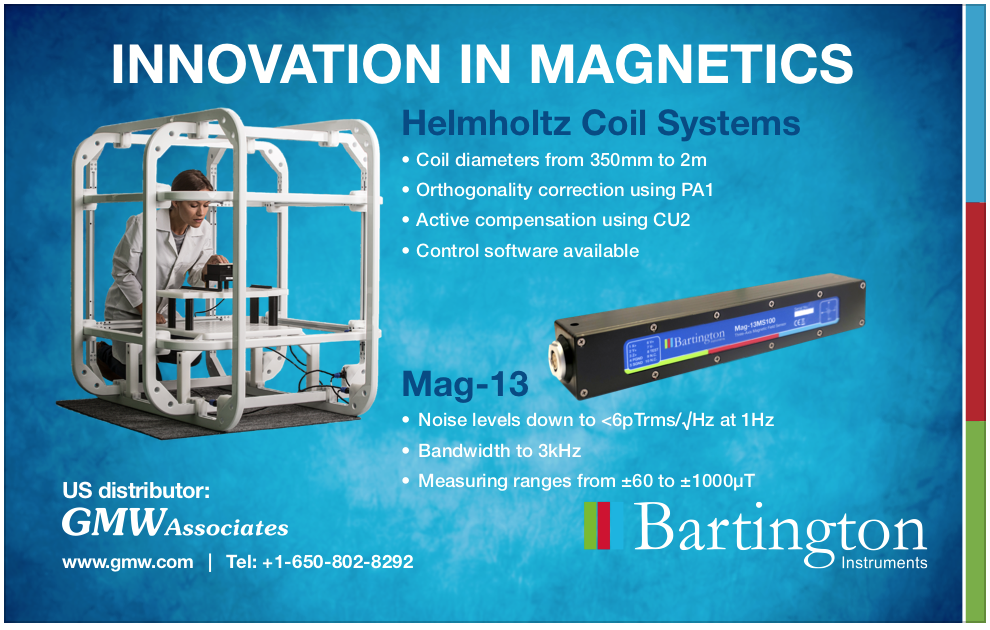 Ground station locations are limited by oceans, mountains and unfriendly territories, and combined with limited data throughput and gaps between passes, the real-time intelligence needed to make tactical decisions is often unavailable.

An on-orbit relay system eliminates these obstacles by providing a network that is always in sight of its ground stations and assets in LEO, MEO, or GEO, as well as airborne platforms. It can provide immediate connectivity as needed as well as continuous and persistent links.

There is an unprecedented proliferation of commercial remote sensing satellites in LEO, collecting EO, SAR, RF and hyperspectral data. New systems are needed to maximize the value of the massive amounts of data these constellations collect.

Advances in transport, analysis and integration are transforming the amount of useful information available and government agencies are looking to benefit from the data that industry can provide.

This proliferation is driving demand for new data relay services and technology advances are making it possible to eliminate the lag in communications with space-based platforms. Developing a standard for optical intersatellite links (OISLs) and technologies, such as onboard processing with the intelligence to control and direct data traffic to optimize the capacity and availability of the network, are contributing to new solutions that meet the need for speed challenge. Secure commercial relay networks are poised to provide alternative space communications pathways that ensure resiliency and reduce sensor-to-shooter latency. 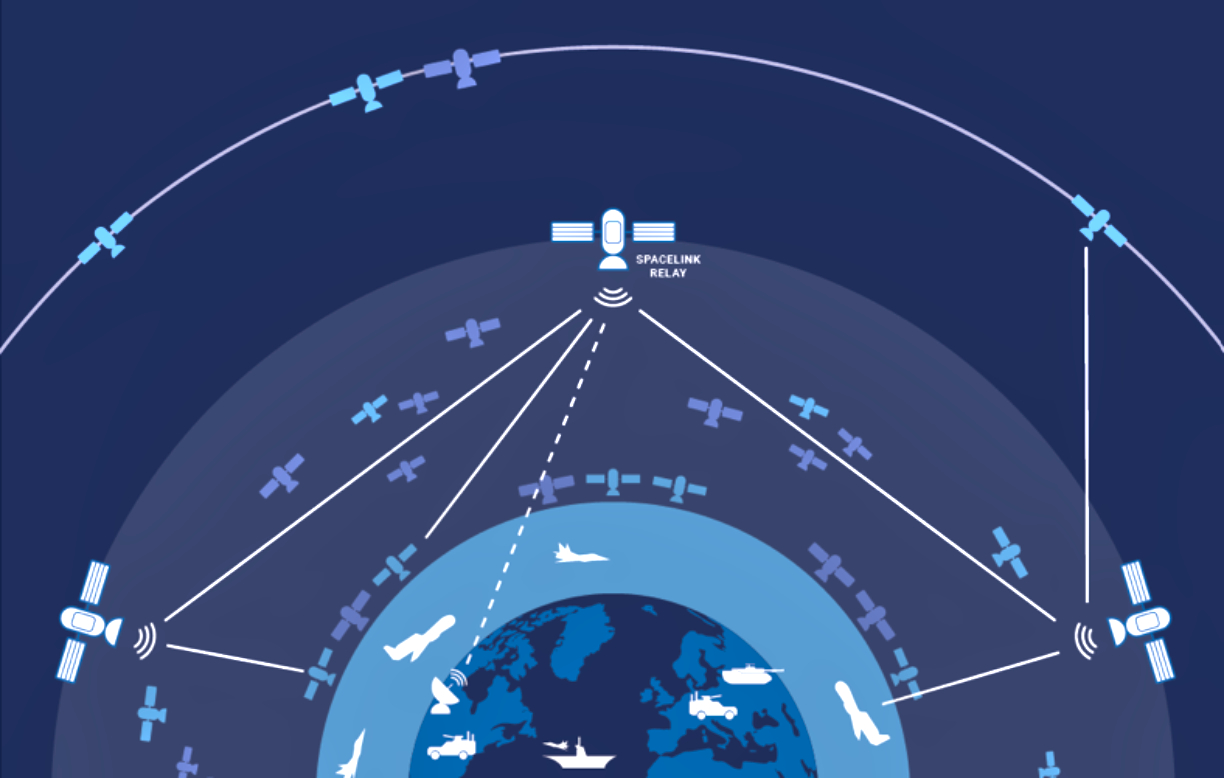 NASA’s plans to phase out its Tracking and Data Relay Satellite (TDRS) system, which now provides communications links for both NASA and national security spacecraft in orbit, is also changing the landscape for commercial solutions.

According to NASA:
Private sector innovation in near-Earth space is accelerating quickly and dramatically. Tapping those advances will ensure NASA missions have the reliable, secure and continual space communications on which their long-term operations depend. That is needed as the legacy NASA owned and operated Tracking and Data Relay Satellite system is decommissioned in coming years.

Today’s tactical military operators need high-capacity communications links to benefit from the growing pool of remote sensing data that is now available. They need a system that easily connects to gateways in the continental U.S., or directly to deployed ground terminals, when and where there is demand, without delays.

This kind of access has the potential to significantly reduce risk to adversary threats to foreign ground stations and data processing nodes in combat and can make the concept of a hybrid architecture combining government satellites and commercial satellites a reality.

With optical inter-satellite links and high bandwidth V/Q-band communications to the ground, gigabit per second throughput of real-time data is possible. SpaceLink has designed an innovative system architecture, implementing services that provide high security and 100 percent access time so that data is available in seconds when it matters the most.

The SpaceLink relay constellation consists of four satellites equally spaced in an equatorial orbit. Scheduled to launch in late 2024 or early 2025, the constellation’s features include:

• 100 percent line-of-sight access to LEO satellites, eliminating delays between the collection of remote sensing data and the delivery of the data to the end user
• Customer-driven real-time tasking and direct downlink of mission critical data
• An option for on-board processing to support
real-time, same orbit, tip-and-cue between multiple and diverse remote sensing satellites (e.g., RF to SAR to EO visible)
• An ability to augment proliferated LEO communications satellites providing a resilient ‘fail over’ capability for government communications paths during periods of pre-planned or adversary-caused loss of communications.

The constellation will handle scheduled, ad-hoc, and urgent requests with service level agreements defining priorities. The cost is a fraction of the cost of deploying or renting a traditional ground station network and connectivity and security are dramatically improved.

SpaceLink relay satellites link to its U.S. based gateways using the Q- and V-bands. From there, the SpaceLink network operation center interconnects with top tier cloud providers, including Amazon Web Services (AWS) and Microsoft Azure for secure and reliable data delivery to end users. 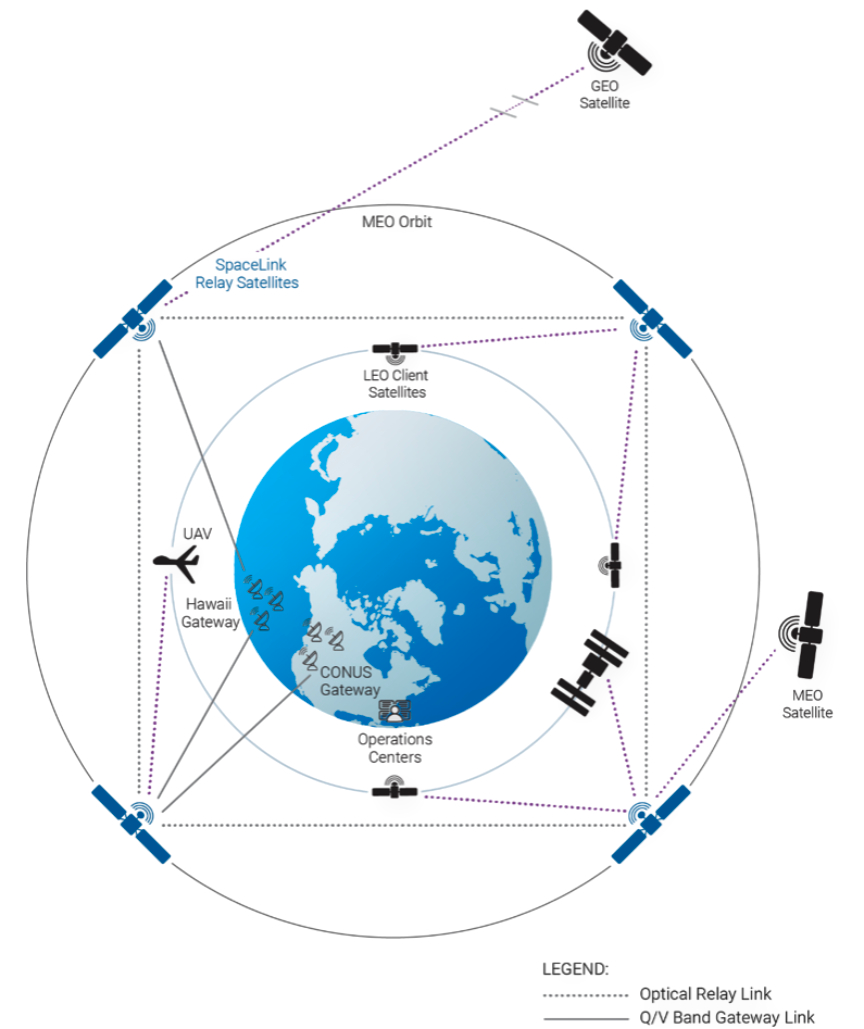 Positioning its relay satellites in MEO gives the SpaceLink network continuous line of sight access to other orbiting spacecraft and its dedicated gateway ground stations in U.S. locations.

Because of this four-satellite architecture, data can be instantly and securely passed over optical links to the node closest to its U.S. access zones. Initially, the SpaceLink ground network has one access zone with two gateway sites each hosting a 10-meter multi-band antenna system. Ninety-nine percent availability is achieved by separating these gateway antennas by 100 km. or more to mitigate weather- related interference.

Advances in optical communications, also known as laser communications, bring significant benefit to in-space relay systems. Using optical intersatellite links provides an order of magnitude increase in data capacity and transport speed compared to RF networks. This is essential when working with datasets such as large quantities of high-resolution imagery.

The Space Development Agency (SDA) has developed interoperability standards so that companies such as Mynaric and Blue Marble Communications can ramp up production and developments for commercial use.

The result is that what was once a cost-prohibitive technology is now becoming affordable for the commercial industry.

Previously, satellites were limited to using RF for communications, which is constrained by spectrum availability, capacity and a broadly dispersed signal which is vulnerable to interference.

RF equipment is also larger, heavier and uses more power than optical terminals and requires large antennas that need to be stowed for launch.

Optical terminals are compact with lower mass and smaller footprints, which is important to satellite operators who need to maximize the cost effectiveness of their spacecraft.

Optical intersatellite links offer the added benefit of an inherent level of security compared to RF signals. As laser beams are small continuous line of sight access to o dedicated gateway ground stations and concentrated, they are much more difficult to intercept and are much less susceptible to jamming or interference than are RF signals.

When SpaceLink launches its first constellation of relay satellites, with 16 optical terminals in all, it will be capable of transporting a data volume of 26 Gpbs per second. The SpaceLink technology roadmap builds toward a 10 Terabit per second, orbiting, optical cloud that will serve users in every orbit — including around the moon.

Timely access to data is essential to reap the benefits of the proliferation of remote sensing satellites in LEO. Now is the time to implement better and faster methods of downloading and integrating the wealth of EO, SAR, RF and hyperspectral data becoming available. Increased cadence and proliferated ground infrastructure are, at best, only a partial solution. An optical relay network in MEO eliminates bottlenecks, reducing sensor to shooter timelines to seconds.

The SpaceLink network is designed to support real-time tasking and downlink of data needed for military operators to make tactical decisions... when seconds matter the most.
www.eosspacelink.com 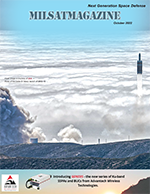