The demand for bandwidth continues at exponential rates, driving operators to search for new solutions. Recently, attention has turned to the emerging Ka-band, high-throughput satellite (HTS) market and solutions that utilize multiple spot beams to serve a region or regions of interest. The key advantage of the spot beam approach is increased frequency reuse, enabling a significant increase in the capacity of a given satellite. This, in turn, allows operators to more efficiently use their frequency spectrum allocations. 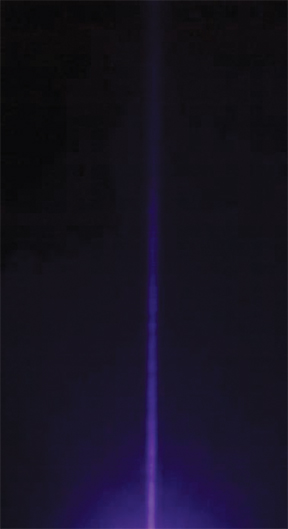 Key Technologies Maximize Benefits of Spot Beam Systems
GEO satellite operators are investing in and deploying ever-increasing numbers of High-Throughput Satellites (HTS) into the GEO-arc, resulting in an increased capacity and reduced cost-per-bit for enterprise customers and individual consumers, and providing new competition to some established terrestrial operators.

While the future is difficult to predict — and the success of these HTS systems is not fully demonstrated — bandwidth demands continue to rise at ever increasing rates and both direct-to-home, enterprise and mobility users will continue to be key drivers of that increase.

Larger apertures are a key enabler for future HTS systems to provide smaller spot beams and increased gain performance over smaller solid reflectors. The smaller spot beams are needed for high capacity frequency re-use strategies, as well as to increase gain to minimize the required user ground terminal aperture. The primary technology challenges for larger reflector apertures are surface performance and pointing stability at Ka-band frequencies. Two reflector technologies have recently been adapted to support operations at Ka-band and address these challenges. The first is an extension of existing, flight-proven Radial Rib unfurlable mesh reflector technology and the second is a non-unfurlable, Fixed-Mesh Reflector. Both types of reflectors can provide for smaller spot beams and increased gain to support advanced frequency re-use strategies.

Ka-band operations using a 5-meter aperture require a surface accuracy of 0.3 mm, or 0.010 inches on-orbit or better. Building on the existing Radial Rib reflector technology, higher accuracy is achieved through the use of additional surface shape control points and by careful selection of material combinations to achieve the best possible thermal stability. This approach does not require any new or unproven materials or changes to existing thermal controls. Surface accuracies that support Ka-band operations have been successfully demonstrated and RF analysis of resulting beam patterns have shown acceptable performance can be achieved with large unfurlable reflectors. 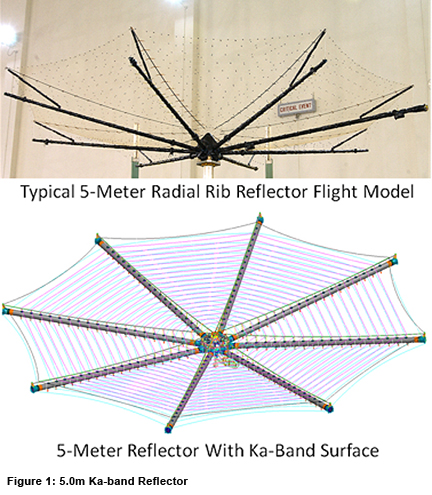 A typical Radial Rib mesh reflector with flight heritage is shown in Figure 2. The system shown is operating today as part of the Tracking and Data Relay Satellite (TDRS) at Ku-band, with 12 flight units delivered and more than 28 years of operational experience on the oldest TDRS reflectors.

The Radial Rib reflector design is ideally suited to address the pointing concerns of small spot beam systems, with the addition of an antenna pointing mechanism (APM) located behind the deployment mechanism in the center of the unfurlable reflector structure, directly along the focal axis. The APM, when coupled with a tracking feed in the feed network, assures accurate pointing of beams. This mitigates the need for more demanding satellite pointing required by smaller spot beams at Ka-band. The simple deployment and unique mounting scheme of the radial rib reflector design, with the positioning of the APM directly in line along the focal axis, greatly simplifies the required translation and tracking adjustments needed.

The radial rib design provides the simplest and most reliable solution available in the industry. More than 15 radial rib reflectors have been successfully deployed operationally dating back over 30 years and most recently in the successful deployment of two 9m reflectors in 2009 on the Sirius-XM FM5 satellite. 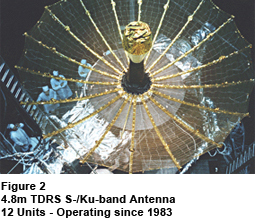 The mesh surface has better RF performance at Ka-band than comparable tri-axial graphite surfaces and approaches that of a solid graphite surface with exotic surface treatments. In addition, the development of mesh materials that operate with minimal losses up to 50GHz and beyond has been accomplished and can be readily applied today.

Use of high reflectivity mesh technology can enable inter-satellite links via V- and Q-bands, and has potential usage for gateways, freeing additional spectrum in Ka-band for potential users (if issues such as atmospheric losses can be accommodated).

Once deployed, solar torque loads from the FMR are much less than a solid or tri-ax weave reflector, increasing potential satellite life and reducing the amount of fuel needed for station keeping. The high mesh transparency (~90%) also reduces the thermal interactions with the spacecraft. 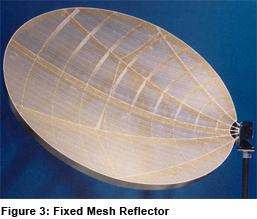 The FMR is best suited for larger reflector systems, from 2.5 meters to 3.5 meters, where substantial mass savings can result. The 3.5-meter aperture FMR allows for smaller spot beam coverage of a given geographic region over existing 2.6- to 2.7-meter standard systems, and supports the increased capacity goals of operators.

The Ka-Band Unfurlable Mesh Reflector and the Fixed Mesh Reflector both are viable technologies needed to fully capitalize on the move to Ka-band spot beam, high-capacity systems. Though these technologies were directed at implementation on Ka-band systems, they can easily be implemented at any frequency range including C-, X- and Ku-bands to provide small spot beams, allowing for frequency re-use and resulting increased system capacity. As future satellite systems continue to demand increased gain, smaller spots, and higher accuracies, the current state-of-the-art reflector technologies are prepared to support the emerging HTS market.

About the Author
David Alexander has more than 25 years of experience in the area of precision unfurlable reflectors and antennas for space applications. Since 1983, he has had various roles within the Space Communications Systems (SCS) business of Harris Corporation – an international communications and information technology company, and a leader in the development of unfurlable reflectors and steerable, solid Ka-band antennas. He is currently a Business Development Manager for the commercial product business area within the SCS business. Prior to this assignment, he was an Advanced Programs Engineer responsible for the development of engineering solutions and program identification with the business unit. He is a member of SSPI and AIAA. 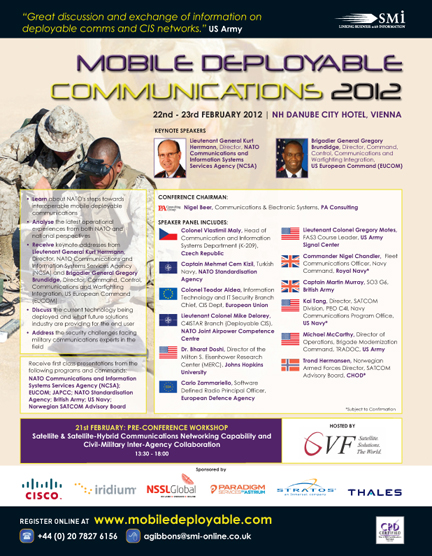