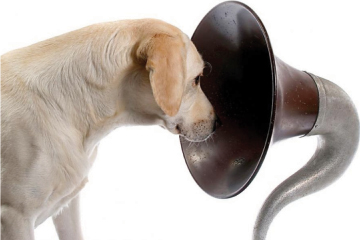 Historically there have existed far fewer choices for Ka-band amplifier products than their lower frequency counterparts. Factor in military grade Ka-band amplifiers and the selection becomes even more scarce. Paradise Datacom has released a new family of Ka-band LNAs and SSPAs that build upon their tradition of highly reliable SatCom amplifier products. These products are suitable for deployment in demanding military applications such as Wideband Gapfiller Satellite (WGS) terminals. 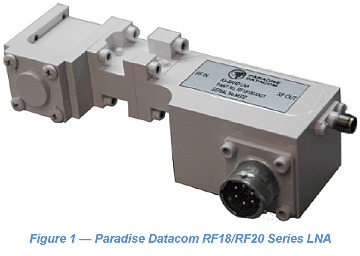 The alarm circuitry allows the LNAs to be used in automatic switchover redundancy systems when used with the RCP2-1100 Redundant Controller. All of the Ka-band LNAs have 55dB minimum gain which buffers out any further noise degradation by the other components in the receive path. Third order intercepts are in excess of +16dBm allowing for superior dynamic range over the large fade range that exists in Ka-band satellite links.

The HPAKa040AC is a 40W saturated output power amplifier that covers the 30.0-31.0GHz band and produces a linear output power of 20-25W across the full WGS band. The amplifier is packaged in Paradise Datacom’s Compact Outdoor amplifier chassis. The Compact Outdoor is one of the industry’s most recognizable packages as it has been in production for over 10 years.

An industry standard, the Compact Outdoor amplifier is known for its ruggedness and high reliability as well as its ease of field maintenance. It is one of the industries only SSPAs that has been independent test lab certified to 50g shock and vibration making it a natural for transportable VSAT terminals. 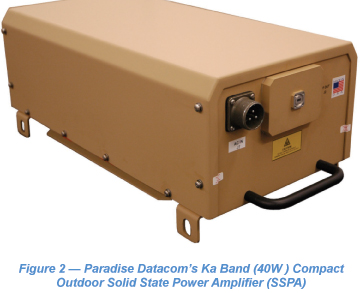 The Compact Outdoor amplifier is available in a wide variety of frequency bands and power levels and has been fielded in stringent environments ranging from desert heat to mountainous cold climates. The amplifier chassis has a unique and efficient thermal system that uses forced air convection cooling. A removable fan tray on the bottom surface of the amplifier can be easily removed to clean out excessive debris from the internal heat sink. No tools are required for the fan tray removal making this maintenance extremely easy to perform in the field. The Compact Outdoor amplifier was specifically designed to fit most standard antenna mounts. The familiar package and moderate weight make the Compact Outdoor a perfect fit for VSAT terminals. The package envelope is 19.9 x 10.0 x 6.50 inches with a weight of 36 lbs. A high power isolator is integrated into the package making the amplifier completely tolerate of any level of load mismatch. A picture of the 40W Ka-band SSPA is shown in Figure 2.

Monitor + Control
The Paradise Datacom Compact Outdoor SSPA incorporates the most comprehensive monitor and control of any Satcom amplifier. Among the standard interfaces include: Ethernet, RS485/422/232, and parallel I/O, in the form C alarms and opto isolated discrete signals. The Ethernet interface can be integrated into higher level monitor and control systems by SNMP or UDP programming. For simplicity, there is also a built-in web browser that enables a very easy monitor and control with a computer running a web brower application. Figure 4 shows a computer screen shot of the built-in web browser.

There are also rack mount (1RU) remote control panels and a Fiber Optic interface link that work seamlessly with the Compact Outdoor amplifier. Alternatively, when an amplifier includes an integrated L-band to Ka-band block up converter (BUC,) the amplifier can be controlled via the FSK control signal multiplexed on the IFL by an L-band modem. There is also a weatherized, tri-color, LED visual display on the monitor and control panel for local visual fault status monitoring. As shown in Figure 3 there is also a switch and link port that is standard on the amplifier. These ports enable the amplifier to be placed in automatic switch-over redundant systems without the need for a separate controller. 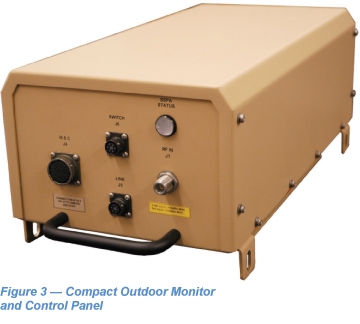 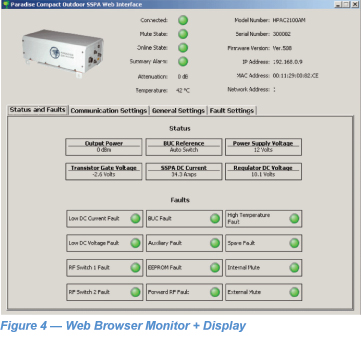 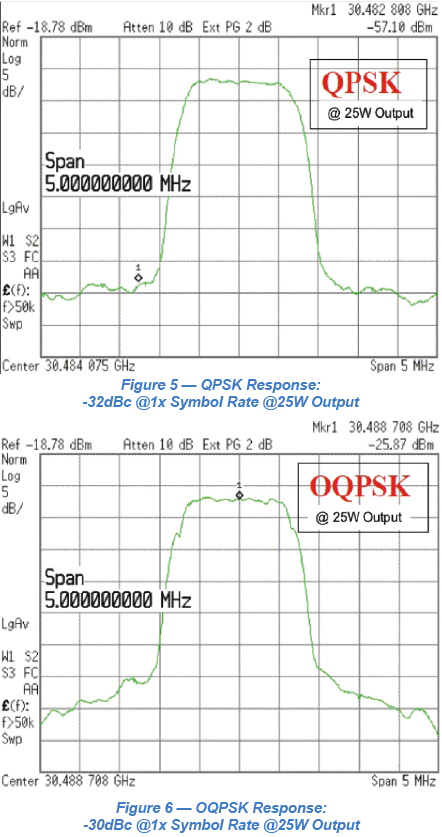 The two tone peformance is slightly worse that the single carrier spectral regrowth due to the higher crest factor. Two tone intermod levels are typically characterized by evaluating the amplitude separation between the third order intermod product and the single tone power in dBc. This is characterized over a wide range of output power to obtain a characteristic as shown in Figure 7. 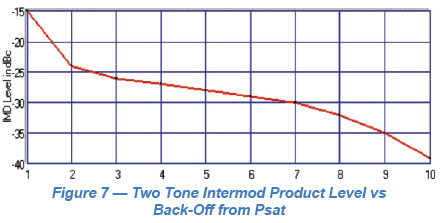 The gain of the amplifier is temperature compensated to keep the gain within a 1dB window from -40oC to +60oC ambient temperatures. The gain is also adjustable from 55dB to 65dB in 0.1dB steps. Prime power consumption is less than 500VA making it one of the most efficient Ka-band SSPAs in the industry.

The Ka-band ZBUC has an efficient and low phase noise local oscillator that is phase locked to a stable reference source. A high stability reference is included in the block up converter. Internal reference stability is of the order +1.10-9. ZBUC technology provides for auto-detection and switchover to an externally applied reference. This is an extremely useful feature to be able to switch the block up converter to an external reference without requiring any factory modifications.

In addition, the ZBUC is capable of automatically phase locking to a variety of external reference frequencies including: 5, 10, 20, 25, and 50MHz without hardware modification.The ZBUC is characterized by its signature outstanding spurious and phase noise performance. 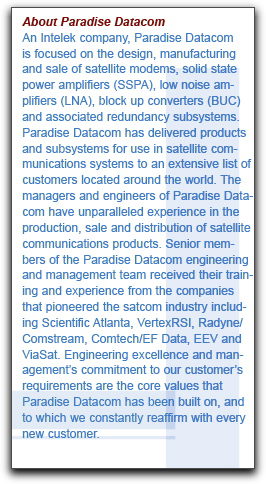 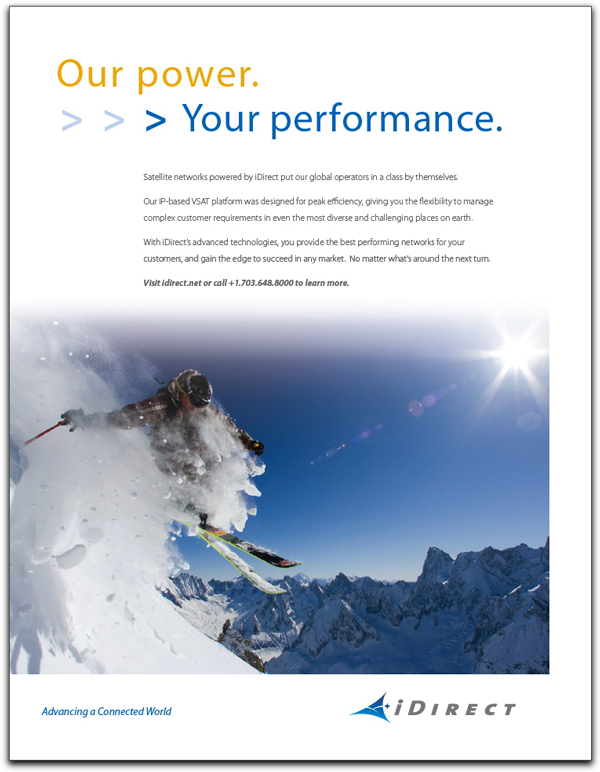