General William L. Shelton made the following statement to the Senate Armed Services Committee on April 24, 2013...

“Our satellites provide a strategic advantage for the U.S., and as such, we must consider the vulnerabilities and resilience of our constellations. My staff at Headquarters Air Force Space Command, alongside the team at the Space and Missile Systems Center, is leading efforts at balancing resilience with affordability. They are examining disaggregated concepts and evaluating options associated with separating tactical and strategic capability in the missile warning and protected communications mission areas. We are also evaluating constructs to utilize hosted payload and commercial services, as well as methods to on-ramp essential technology improvements to our existing architectures. Beyond the necessity of finding efficiencies and cost savings, we may very well find that disaggregated or dispersed constellations of satellites will yield greater survivability, robustness and resilience in light of environmental and adversarial threats.”

Introduction
National security space assets provide Joint Warfighters and our nation with strategic warning, assured communication, and precision positioning, navigation and timing—an unrivaled advantage in today’s security environment. Use of these capabilities has evolved considerably in recent years; however, the space systems themselves have not.

Many of these systems have designs that date back to the Cold War. Requirements in that era were driven by the compelling need for nuclear attack warning and the desire to maintain a bilateral balance of power. Threats to space systems were deemed a tolerable risk, since an attack in space would be provocative and escalatory and might be interpreted as a prelude to nuclear war.

However, the security environment of today is much different than in the past. Previous considerations led to satellite designs that maximized the size, weight, and capability of every payload within the constraints of a given launch vehicle.1 Performance was prioritized over protection as the threat of “mutually assured destruction” reduced any risk of an attack. System designs naturally evolved to become increasingly complex, integrated and expensive. Our current satellites are marvels of modern engineering, but their suitability is critically dependent on the strategic balance of a foregone era.

This article examines the need to provide resilient and affordable capabilities to preserve our operational advantage in space. The focus is on “disaggregating” space capabilities onto multiple platforms or systems. Disaggregation improves mission survivability by increasing the number and diversity of potential targets, thereby complicating an adversary’s decision calculus and increasing the uncertainty of successful attack. Disaggregation is of value whether the threat is a hostile adversary, or an environmental threat, such as orbital debris.

A New Security Environment
Warfighting requirements on the surface of the Earth have rapidly evolved. The rate of change continues to accelerate, virtually guaranteeing the future security environment will be different than today.2 In Joint Force 2020, the Chairman of the Joint Chiefs of Staff echoes the defense strategic guidance for that environment, including two elements of crucial interest: Projecting power despite anti-access/area denial challenges, and deterring and defeating aggression. Considering the lengthy time required to develop and field our current space assets, almost by default, the space systems that met yesterday’s challenges must address today’s problems, and today’s architectures must address the future security environment.

The overwhelming success of Desert Storm delivered a global wake-up call to our adversaries. State and non-state actors saw firsthand the advantages of networked command and control, overhead surveillance and precision targeting. Conventional forces gained prominence as the centerpiece of U.S. national power projection and began to slowly change our adversary’s perception of nuclear power as the central focus of national deterrence. Meanwhile, space systems were increasingly viewed as critical to U.S. conventional power. Combined with the fact that space capabilities are provided by a few, relatively vulnerable satellite architectures, led to the assessment that U.S. reliance on space was a potential Achilles Heel. 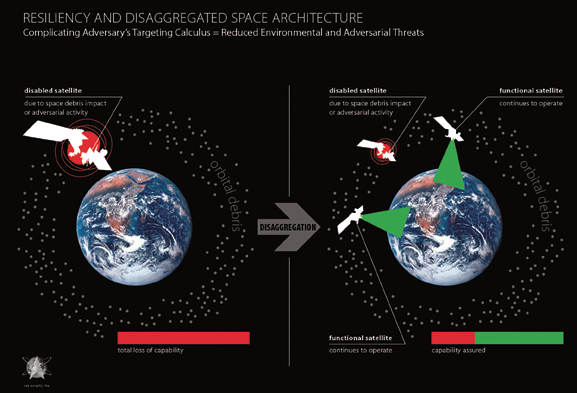 These factors have contributed to rapid growth in threats to our space systems. Adversaries have had more than 20 years to react to Desert Storm and they have concentrated efforts on countering our space advantages.

In 2007, China successfully demonstrated the capability to destroy a satellite in low earth orbit, and open source reporting described their capability to interfere non-kinetically with optical space systems using laser dazzling.3 While kinetic threats could obviously be devastating, non-kinetic threats, such as radio-frequency jammers and cyber attacks, can be equally destructive and are far more prevalent. Cyberspace threats, in particular, have exceptionally low barriers to entry and are growing rapidly. Space systems that rely on complex software and radio-frequency links could be susceptible to these attacks, despite robust cryptographic protection.

Not only man-made threats from state and non-state actors have increased; dangers inherent in the space environment itself have evolved, including increased amounts of debris, competition for electromagnetic spectrum and the sheer number of satellites in space.

While not the result of a hostile and intelligent adversary, the environmental hazard is no less real. In 2009, the first collision involving an active satellite occurred when COSMOS 2251 and Iridium impacted on orbit, creating thousands of pieces of debris.4 In short, the threat environment has changed extraordinarily, and we must adapt critical U.S. capabilities if our operational advantage is to endure.

No discussion of the changing security environment is complete without addressing current fiscal challenges and budgetary trends. Continued funding of expensive space systems is no longer assured, and is in fact assumed to be impracticable. Large, complex systems that require many years of sustained investment to design, develop, field and operate may no longer be affordable. Moreover, given the growing threat environment, they may place a significant amount of national treasure at increased risk. While astute mission assurance measures have decreased launch failures to record lows, there is always the risk that a single launch failure, early-orbit anomaly, environmental event or hostile act could result in the loss of hundreds of millions, or even billions, of dollars.

Resilience + Disaggregation
Given the challenges of a rapidly changing security and fiscal environment, new and innovative approaches to provide capability in an affordable way merit close examination. One response to these changes that secures capability for the Joint warfighter and the nation is to seek resilience in space systems. With respect to satellite constellations and space architectures, AFSPC/CC defined resilience as follows:

“Resiliency is the ability of a system architecture to continue providing required capabilities in the face of system failures, environmental challenges, or adversary actions.” 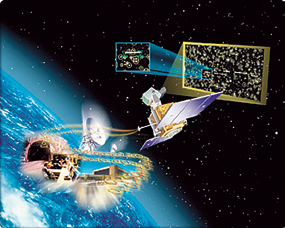 Artistic rendition of the on-orbit collision of a dead, orbiting, Russian Cosmos satellite and a functional Iridium satellite in 2009.

Disaggregating space architectures is one strategy to improve resiliency, offering a means to trade cost, schedule, performance, and risk to increase flexibility and capability survivability. To establish a common lexicon, we are proposing the following definition of space disaggregation:

“The dispersion of space-based missions, functions or sensors across multiple systems spanning one or more orbital plane, platform, host or domain.”

A disaggregated system design offers a means to avoid threats, ensure survivable capabilities despite hostile action, and develop the capacity to reconstitute, recover or operate through adverse events should robustness fail. Carefully pursued, disaggregation can lead to less costly and more resilient space architectures in the face of a rapidly evolving security environment.

Editor’s note
Part Two of this information AFSC article will be published in the November issue of MilsatMagazine.

Additionally, please read General Shelton’s “Military Space: At A Strategic Crossroad”later in this issue of MilsatMagazine. 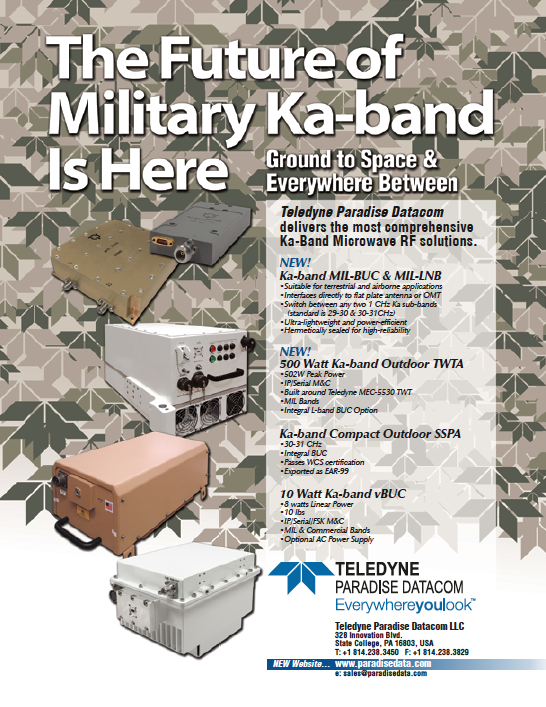