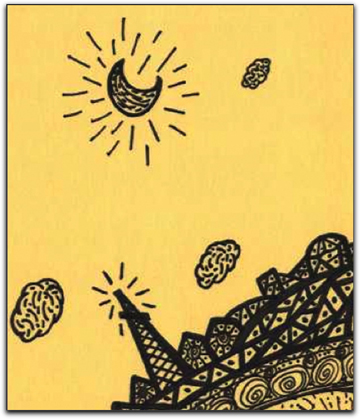 A complete SDR-based BGAN radio was successfully demonstrated at the SDR Forum Conference and Exhibition 2009 in Washington D.C. in December. The demo revealed the result of the joint SDR program completed by GateHouse, Inmarsat, and Spectrum Signal Processing by Vecima (Spectrum) and gave evidence that BGAN SDR-based satellite communication (SATCOM) is an opportunity readily at hand for manufacturers of military radios.

The BGAN Class 10 active tracking antenna supplied by SpaceCom and the L-band front-end are for L-band usage only —– however, although these components are calibrated to be compliant with the BGAN specifications, they would be able to run other L-band waveforms as well. Alternatively, the SDR-4021 radio platform from Spectrum would be able to run other waveforms in other frequency bands using other front ends.

The BGAN SDR radio obtained Inmarsat approval for on-air usage prior to the SDR Forum Conference and Exhibition and on-air demonstrations were given in the exhibition area with a 50 meter cable connecting to the antenna, which was placed outside the exhibition hall.

Several gigabytes of data were exchanged with the BGAN network via the air interface during the four days of the exhibition. The GateHouse team demonstrated the following applications, all on a standard laptop connected to the BGAN SDR radio with an Ethernet/IP cable:

The demonstrations marked a technological breakthrough for BGAN SDR — moreover that the technology has matured to a point enabling integration in viable solutions.

Software Defined Radio
Over the last 30 years, radios have changed from being purely hardware-based to containing more and more software. The term ‘Software Defined Radio’ is not new but has been around for quite some time representing a vision of a single wireless multi-purpose device that seamlessly integrates multiple communication channels, including SATCOM.

Driven mainly by the military market and DoD/MoD’s need for interoperability, flexibility in choice of communication means, reduced total cost of ownership as well as rapid functionality upgrades and repair, the SDR technology has experienced great advances and focus during the last decade.

Increasing globalization, i.e., participation of many countries in international conflict resolution and peace keeping missions, has significantly increased the need for communication and interoperability in remote areas of the world.

SDR does not only provide benefits for the end-users but also for the manufacturers of military radios. It provides each manufacturer with the opportunity of customizing their offerings to changing customer demands incurring only limited extra costs and time to market. With SDR, the manufacturers can produce the SDR radio hardware and postpone equipping it with soft-ware waveforms until customer requirements are clearly defined. This significantly saves development time and waveform porting costs. In other words, with SDR, manufacturers are capable of delivering greater customer value at lower cost.

SDR technology has been encouraged by the rapid technological developments over recent years in integrated circuits, where size and power consumption has decreased and performance has increased, enabling very high performance generic hardware platforms.

The U.S. DoD has invested in SDR via the Joint Tactical Radio System (JTRS) program which has produced a number of SDR radios and waveforms. JTRS has also developed the Software Communication Architecture (SCA) which specifies how radio platforms and waveforms must be designed and implemented to ensure interoperability.

Inmarsat BGAN
Inmarsat is a recognized pioneer and market leader in the field of global Mobile Satellite Services (MSS), and the IP-based BGAN (the acronym for Broadband Global Area Network) service is the most advanced of the company’s current offerings. The system offers standard and streaming IP data services as well as a voice and text service (see the fact box below...).

While the Inmarsat BGAN system is a commercial system, it has been adopted by military forces for beyond-line-of-sight (BLOS) communication, primarily because it is easy to set up and use and provides an on-demand 492 kbps data service on the surface of the Earth with exception of the Polar Regions. 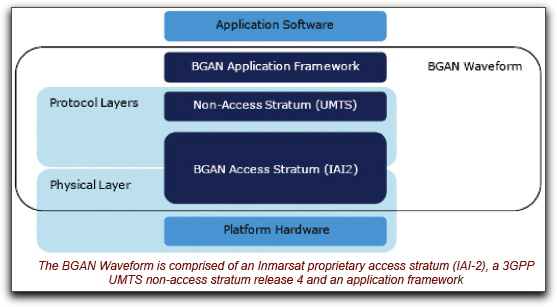 In 2008, the government sector (civil and defense) contributed 55 percent to the overall Inmarsat BGAN revenue. The airtime is generated from an installed terminal base provided by manufacturers of commercial equipment for government aircrafts, ground vehicles and ships. The shift to SDRs is expected to enable BGAN on tactical radios, as it provides an opportunity for an instant BLOS capability, at limited extra cost.

GateHouse BGAN SDR Waveform
The GateHouse BGAN SDR Waveform contains all the functionality required to build a BGAN radio with on-demand, BLOS communication capability. The waveform is integrated on an SCA version 2.2.2 compliant platform and can run as the only waveform on the radio or as one of several waveforms on a multimode radio. Development efforts to port the waveform from one radio to another is considerably less than for a conventional radio design, where the software typically interfaces with custom designed hardware.

The traditional approach has been to develop rather inflexible purpose-specific hardware plat-forms for BGAN radios which effectively limit the solutions to one radio/one application. The SDR approach implements the complete functionality (waveform) in software and leaves the underlying hardware generic and fit for other purposes as well.

In addition to the advantage of reusing radio hardware platforms and allowing coexistence of multiple waveforms on a single radio, the SDR approach also enables considerably easier up-grade procedures of the BGAN terminals as the BGAN standard evolves (e.g., support of higher data rates).The GateHouse BGAN SDR Waveform is structured internally according to the Inmarsat BGAN specifications and contains multiple layers of functionality and is comprised of an Inmarsat proprietary access stratum (IAI-2), a 3GPP UMTS non-access stratum release 4 and an application framework.

The demonstrations in Washington in December marked a breakthrough for BGAN SDR and a milestone for GateHouse, which for a decade has been the leading independent provider of the complete embedded software package for Inmarsat BGAN terminals.

Advantages Of The SDR-based BGAN Solution
Today a wide variety of commercial BGAN terminals are available. While these terminals are reasonably inexpensive they do not readily provide the levels of flexibility, security or robustness which are required for military use. 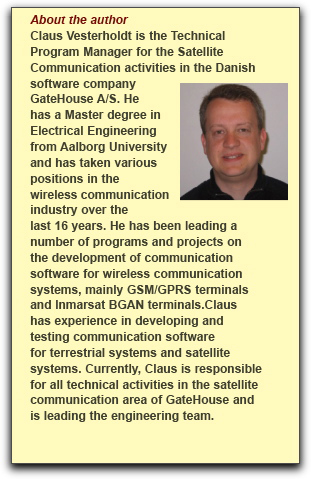 One solution to this problem is to combine a commercial terminal with a military radio, and use the built-in security features of the radio to provide secure end-to-end communications over BGAN. Another solution is to use military-grade BGAN terminals and combine the advantages of secure communications platforms with the rugged construction that’s needed to operate the equipment in the field for extended periods of time. The development of the GateHouse BGAN SDR waveform was sparked by the realization that an SDR based solution is able to provide all the advantages of the existing solutions, while at the same time reducing the amount of hardware needed.

A BGAN SDR waveform can be integrated with any military-grade Software Defined Radio capable of transmitting and receiving in the BGAN L-band frequency range (1.5GHz-1.6 GHz). This means that units can now be deployed with a single multifunctional radio that can be BGAN-enabled almost as easily as changing a channel or another preset.