The future of space capabilities in the United States Air Force is at a strategic crossroad. A crossroad that requires us to address our means of protecting mission-critical constellations, to challenge traditional acquisition practices, to analyze new operational constructs, and to widen cooperative relationships both domestically and abroad. 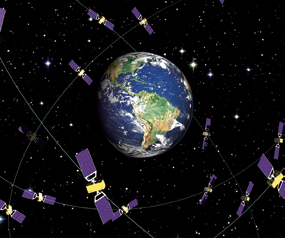 Artistic rendition of the GPS constellation.

Our military satellites are technological marvels providing time-critical global access, global persistence, and awareness. These systems not only provide foundational, game-changing capabilities for our joint forces, they also have become vital assets for the global community and our world economy. Dependence on these space capabilities gives our nation a great advantage—an advantage some would like to minimize. Satellites designed and built for a benign environment are now operating in an increasingly hostile domain. The challenge before us, then, is to assure these vital services will be present in times and places of our choosing while simultaneously lowering the cost.

The Air Force has been in continuous combat operations since January 1991, when Operation Desert Storm commenced. It seems hard to believe now, but Global Positioning System (GPS) receivers were literally duct-taped to windscreens of helicopters to capitalize on the nascent navigation capability provided by the not-yet-completed GPS constellation. Similarly simplistic was the voice-only provision of missile warning data to our deployed forces and allies to warn them of Iraqi Scud missile launches. We learned much in the early 1990s about the need to further integrate space capability into tactical operations.

For example, the utility enhancements of our GPS constellation have enabled us to develop real-time integration with the war fighter. Our GPS User Operations Center provides more than 230 position accuracy assessments to our deliberate and contingency mission planners daily.

Our space-based infrared system (SBIRS) is also a significant improvement over our capabilities in the first Gulf War. The infrared processing of SBIRS GEO-1 and -2 presents the warfighter with faster and more accurate launch information and impact-point predictions, and the SBIRS staring sensor will enable tremendous enhancements to our battlespace awareness.

The entire joint force is now dependent on space assets for all operations, ranging from humanitarian relief through major combat. Space-derived data, once the purview of strategic-level users only, now reaches to the lowest tactical echelons. But with this dependence comes a corresponding vulnerability.

As we learned in the crucible of combat, others were watching and learning lessons of a far different kind. As we continue to take significant strides in the integration of space-enabled data into all aspects of operations, our adversaries seek ways to disrupt this asymmetric advantage. The most obvious example of these counterspace efforts is the Chinese anti-satellite test in 2007. In this test, a kinetic-kill vehicle, successfully engaged a nonoperational Chinese weather satellite. Although China demonstrated its ASAT prowess to the world, the unfortunate by-product of this test is tens of thousands of pieces of space debris which will be a navigation hazard to manned and unmanned spacecraft for decades to come. 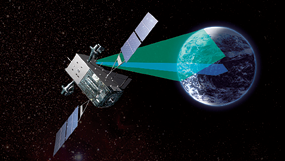 The growing debris problem is a concern to spacecraft operators in all sectors: military, civil, and commercial. The collision between an active Iridium communications satellite and a defunct Soviet-era Cosmos satellite produced yet another debris field. These were two relatively large objects coming together at precisely the wrong time.

Much smaller objects, which are much greater in number, also represent catastrophic risk to fragile spacecraft. Therefore, the potential exists for further collisions, creating a cascading effect of increasing debris in low Earth orbit. We must control debris creation, and we must increase our ability to track the debris to enable collision avoidance when possible.

Another troublesome development is the proliferation of jamming assets. GPS jammers are widely available, complicating our employment of GPS navigation and timing signals in weapons and platforms. Satellite communications jammers also are plentiful, which impairs our confidence in over-the-horizon communications when we would need it most.

Other threats to our space capabilities either exist or are being actively researched, so the broader point is that increasing counterspace capabilities, combined with a growing debris threat, make the space domain a much more hostile place. Therefore, it should be obvious that we cannot expect space assets designed to operate within a very permissive environment to operate effectively in this “new normal” of a challenged space domain.

The other important factor defining the strategic crossroad is the downturn in the budget. While there is substantial uncertainty in the actual budget figures for the future, it is very safe to say the peak budgets are behind us. If we are to continue providing foundational space services for our warfighters, we must look for less expensive alternatives to our current systems.

It’s instructive to look first at how we arrived at the decisions to build highly complex, expensive satellites. Because the cost of launch is so high, our business-case analyses told us that we gained highest efficiencies by packing as much capability as possible onto each satellite. Tightly packaged and integrated satellites, such as the SBIRS and the advanced extremely high frequency (AEHF), were borne of this design philosophy. Additionally, in both of these examples, we pushed hard on advancing certain technologies, resulting in significant, nonrecurring engineering costs—and corresponding program delays. Those development challenges are behind us, but even the production models of these spacecraft, bought under more efficient acquisition frame- works, still are very expensive.

Either of the two key factors cited—a radically different operating environment and a declining budget—should be a shouting mandate for change. When we combine these factors at this epoch in time, however, it should be obvious that a status quo approach is simply inadequate for our future. To sustain space superiority and the space services our joint force now takes for granted, we must consider future architectural alternatives. These alternatives must balance required capability, affordability, and resilience.

Resilience in the face of the previously discussed growing space threats is an imperative. If space assets come under attack, either as a precursor to conflict or as an integral part of terrestrial hostilities, our architectures must be resilient enough to assure mission accomplishment. Maintaining a fragile-by-design architecture, which is vulnerable to a golden BB, could result in the loss of a critical resource when we need that capability the most.

For example, the AEHF satellites are designed to operate in extremis—in a trans- and post-nuclear environment to enable the National Command Authority to command and control forces necessary to ensure national survival. As currently envisioned, we will procure just enough of these satellites to provide a minimal constellation with no resiliency to attack. Just as we would have trouble with a cheap shot, we also are not resilient to premature failure of a satellite in the constellation. Building replacement satellites takes years, and the high cost precludes spares on the shelf. 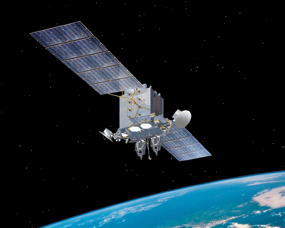 Artistic rendition of an AEHF satellite.

While we could merely buy more of the same designs to provide the needed resilience, we are studying much less expensive concepts. The first is called disaggregation. Again using the example of AEHF, both strategic and tactical protected communications payloads are hosted on the satellite. As a result, the satellite is both large and complex—and size and complexity are drivers of cost in both design and launch. Separating the two payloads on different satellites would accomplish three things: (1) the complexity would decrease, thereby driving down the cost; (2) the satellites would be smaller, enabling smaller boosters and driving down the cost; and (3) at a minimum, the adversary’s targeting calculus would be complicated with more satellites, thereby producing at least a modicum of resilience in the face of intentional acts.

Another potential advantage of disaggregation is the ability to host payloads on other platforms, including commercial satellites. The Commercially Hosted Infrared Payload has been a trailblazer in this regard, and much more work with industry is already under way.

We have learned that the commercial enterprise, which can integrate military payloads and the acquisition process to get capability into space, is both flexible and affordable. We continue to look into other pathfinders and have engaged in industry outreach to discuss ways to better partner and apply synergies within this rapidly evolving domain.

A disciplined adherence to high technological readiness-level hardware also is required to make this approach affordable and achievable. Technological refresh will prove necessary in some areas as we approach these alternatives, but there is no reason today to push technology as hard as we have in the past. Space Modernization Initiative (SMI) funds will help mature sensor designs, communications pack- ages, and software, which then allows for wiser choices in the actual development programs for these alternatives. These SMI funds must be protected in future budgets to better equip program managers with design alternatives.

As we contemplate smaller satellites and smaller boosters, we can also consider using commercial, off-the-shelf satellite buses rather than building specialized buses for each of our spacecraft. This also opens the window for commercial software to fly those buses, avoiding software and ground station development efforts for each new spacecraft. Clearly, we would still require payload-related software, but the simplicity and cost-savings of buying both off-the-shelf buses and ground software are worthy of exploration.

Because spacecraft production timelines are long, the lead time on decisions is correspondingly long. The die is already cast for SBIRS 5 and 6 as well as AEHF 5 and 6. Assuming these spacecraft achieve their required lifetimes, replacement spacecraft are not needed until the mid-2020s. However, that also means decisions on these replacements must be made in the 2017–2018 time frame. Budgetary decisions on an architectural direction, then, must be made in 2015 or 2016.

Clearly, the theories of providing required capability with enhanced resilience at a reduced cost will be rightly debated in the coming months. The Space and Missile Systems Center has several study efforts under contract today to produce empirical data to inform this debate. A business case analysis is absolutely required. A technological feasibility determination is needed. However, the signs all point to a good marriage of affordability and resilience while procuring required capability.

Augmentation of some key mission areas through international partnerships can help relieve some of the budget pressure and strengthen strategic international ties. Building partnerships increases capacity and shares the responsibility for international security. For example, significant work in the area of protected and survivable satellite communications has been ongoing with Canada, the Netherlands, and the United Kingdom. Australia has committed to participating in the Wideband Global Satellite Communications program, as well as hosting sensors important to our Space Situational Awareness capability. Our international cooperation and partnership with industry increases our capacity, improves our capability, shares in the cost burden, and helps extend global presence.

Much work remains, but time is short. A fundamental restructuring of our space architecture is under consideration, and opinions will be offered from many quarters. But given the new normal in space, given the new budget climate, isn’t it good common sense to look at alternatives to the status quo? Let’s protect our SMI funds, let’s do the hard study work, and let’s have the data do the talking.

In this century, we face a growing number of nations with near-peer or peer capabilities, which may challenge our notions about space superiority. In order to maintain our edge, we must continue to lead in space innovation. Tomorrow starts with the vision we develop today.

We must capitalize on the present opportunity to reshape the space environment, sustain global capabilities, and continue our asymmetric advantage in space.

Editor’s note
Our thanks to the Air & Space Power Journal for their permission to republish General Shelton’s article to our global readership. More information regarding the ASPJ is available at: http://www.airpower.au.af.mil/