From NASA and the U.S. Department of Defense to industry giants and creative entrepreneurs, it’s no coincidence so many organizations are embracing the weight, cost, and quick deployment advantages of small satellites (smallsats) and nano-satellites (nanos) for missions ranging from imagery to national security and essential communications for Warfighters. 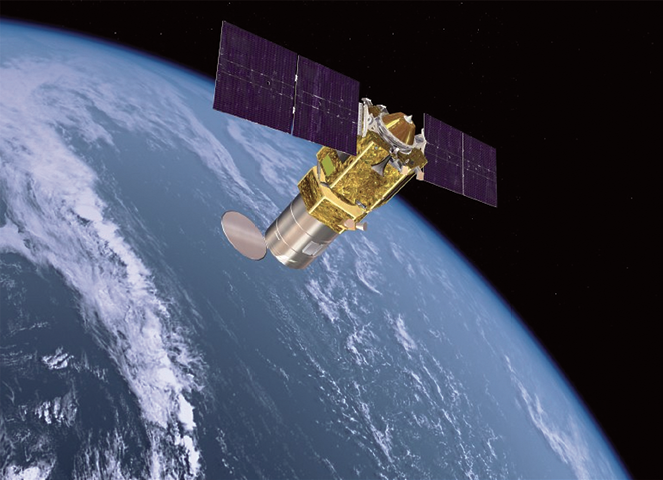 The benefits of these tactical satellites are clear; space assets can be launched and fielded more rapidly, constellations provide a more responsive space architecture than a single satellite, and there is greater redundancy and resilience from adversaries.

Just as small and nano-satellites are redefining mission models in space, they are also creating new opportunities on the ground, where, in practical terms, they can function similarly to a Swiss Army knife—small satellites can provide access to remote locations, support warfighters in the field and on the move, and deliver near-real-time intelligence.

However, the smallsat’s unique form factor in space is only half of the mission equation. The smallsat must also take into account what’s occurring on the ground in the Command & Control (C2) system. For tactical users, such as Warfighters in the field who may only have limited satellite training, and for more urgent and immediate data retrieval needs, smallsats must be matched with a ground system that can leverage their advantages for a broad swatch of needs.

Adaptable User Interfaces
One of the recent uses of small satellites has been to deliver communications into and out of areas that are remote, hostile, or the terrain prevents traditional satellite communications. Placing small satellites in an inclined orbit can provide enhanced coverage for tactical users in these disadvantaged locations.

For Warfighters in the field who need quick operational status of the nano or fleet, the user interface must provide a Common Operating Picture (COP). With a dashboard that includes telemetry roll-ups, this COP can show the operational status of each major subsystem of the small satellite, the communications coverage times showing when the satellite is in view, along with any procedures or alerts from real-time execution. 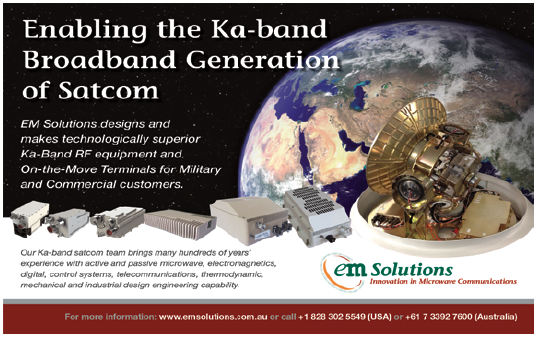 Combined into a single screen, the COP provides the tactical operator all of the information they need for real-time status about their satellite, and the flexibility to create new dashboards on the fly as the system evolves or mission needs dictate new requirements.

For example, a special operations unit may be using the nano for communications into and out of a high latitude region. Toward the end of life of one of the nanos, the communications officer may want the dashboards in the field updated to show the total available spacecraft bus power parameters alongside the communications payload power draw in the COP. This allows verification that there is adequate power to communicate into and out of their region, telemeters that would have been unnecessary for the majority of the mission.

Enabling Multi-Tasking
Deploying imagers on the small, low unit-cost form factor of smallsats has been explored dating back to at least 2010 with the U.S. Army’s Kestrel Eye program. This approach allows constellations of imagery satellites to be funded and fielded at a fraction of the weight and cost of traditional imagery satellites—which can be 100 times heavier and more costly.

When flown in a constellation, smallsat imagers reduce target revisit times, providing field forces with a much shorter intelligence cycle from data request to imagery receipt. Not only do the multiple imagers help accelerate tactical operations on the ground, but the constellation provides greater resiliency in orbit, lowering the risk from adversaries, and satisfying the strategic concerns of senior defense officials for disaggregation. Of course, with the capabilities from a larger number of smallsats, tactical operators also face more cumulative tasking demands, which places greater importance on automated tasking that allows hands-off or even lights-out command and control.

When using the appropriate command and control system, tasking uploads can be pre-defined and set to occur autonomously when the satellite is in view of the ground station. They can also be defined semi-autonomously, with ad hoc tasking that’s initiated with minimal interaction from the user, such as a tactical commander who needs to see imagery for an area five miles north of their current position. In this case, latitude and longitude for the area are input into their mobile device, which is uploaded whenever the nano-satellite is overhead, imaging the area when in view, and sending the imagery back to the operator at the next pass or even during that current pass. To ensure the probability that each tasking will be received and the target will be imaged successfully, constraints can be incorporated into the automated procedures as well.

Likewise, if signal strength is an issue for a nano communicating with a new ground transmitter in theater, automation will be vital. Automated procedures can be set so that transmission only begins once the signal strength exceeds a certain value, where the link is known to be stable enough to transmit data. Procedures can be pre-defined to respond to anomalous events both on the ground and on the spacecraft. In addition to managing spacecraft subsystem faults and power cycling or swapping onboard components, these procedures can also automatically detect if a primary antenna control unit or other ground equipment was non-operational, switching to a backup facility instead.

Optimizing Data Retrieval
Signal tracking is another growing application for nanos that creates new demands on the ground system. Examples that illustrate the capabilities needed to support data retrieval include tracking AIS signals on ships and tracking friendly forces or adversary transmitters. In each case, the nano’s payload would be recording these signals when overhead. Then, when over a downlink site, the time and location of each signal would be downloaded as mission data.

In a similar fashion to uploads, the C2 system should support automated mission data downloads, occurring as soon as the nano comes into view of the downlink site. When the download is completed, data can automatically be transferred to an end user or displayed for the tactical user.

Automated transfer of the mission data to a combatant commander, for example, is made easier through standardized interfaces such as FTP, GMSEC, or CCSDS Mission Operations Services. In other cases, however, the intelligence officer of a Naval or Coast Guard ship, for example, would want AIS signals displayed on their COP dashboard in real-time to show all of the ships in their surrounding area.

A Future Of New Capabilities
Clearly, smallsats and nanos have introduced a new mission model. When used operationally, they can provide a more tactical and adaptable alternative to traditional large satellite systems. This applicability for operational military and intelligence use is creating new interest and urgency throughout Department of Defense service branches and agencies; from the U.S. Defense Advanced Research Projects Agency (DARPA), which is exploring the launch of smallsats up to 100 kilograms on 24-hour notice under the Airborne Launch Assist Space Access (ALASA) program, to the Air Force’s Operationally Responsive Space (ORS) office, which is pursuing the deployment of modular space systems in under seven days to meet urgent warfighter needs.

To maximize the operational utility, small satellite ground systems need to be equally as flexible and cost effective as their space counterparts. Providing a Common Operating Picture, adaptable dashboards, automated tasking and mission data retrieval, and real-time transfer and display of mission data are the first steps in meeting these needs of the small satellite ground system. As more creative applications for smallsats come to fruition, so too will command and control innovations to enable them.

About the author
Victor Gardner is the Small Satellite Project Manager for Kratos Technology & Training Solutions, Inc., a division of Kratos Defense. He can be reached at victor.gardner@kratosdefense.com 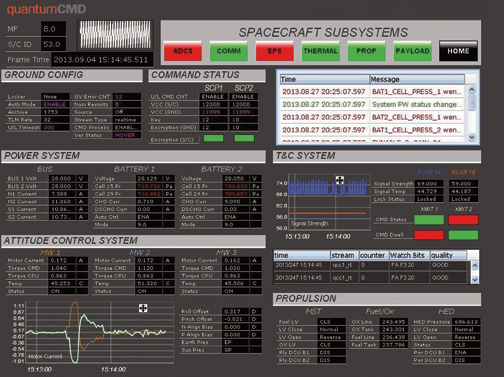 Data-rich dashboards give tactical users a common operating picture of spacecraft and ground status, with drill-down ability into each subsystem and ground component for further fidelity, whether for a single satellite or fleet of smallsats.

One of the great cost benefits of small satellites is that their many form factors allow flexibility to support varying operational and economic mission requirements—from minimally-capable to advanced CubeSats and microsatellites, with or without propulsion, operating in any band. This diversity means that the Command & Control (C2) system must also be flexible, which has led to quantumCMD, a low cost C2 solution designed by Kratos specifically for small satellites; one that is ready out of the box to support any smallsat, ground equipment and mission CONOPS imaginable, tactical or strategic.

quantumCMD is standards-based and features intuitive interfaces for users to easily tailor operations for their unique configurations, while dramatically reducing customization costs. Telemetry databases are large enough to support a range of spacecraft classes, including highly-capable ESPA-class small satellites that may have stringent pointing requirements, redundant and autonomous spacecraft fault management.

quantumCMD’s dashboards are also highly flexible and can be quickly tailored on the fly to produce a Common Operational Picture (COP) that works for small to even very small missions. Flexible procedures support a variety of mission CONOPS, handling simple or complex routines for anything from state of health checks to mission tasking, even full lights-out operations.

Kratos, the developer of EPOCH IPS, designed quantumCMD to keep up as missions grow. quantumCMD’s architecture is fully scalable, expanding modularly to protect investments as operations grow from a single CubeSat to a full and expanding constellation. For more information about quantumCMD, please visit http://www.KratosDefense.com/quantumCMD, or, email info@quantumCMD.com