The requirement for real-time sharing of intelligence, surveillance and reconnaissance (ISR) information continues to grow in the military and homeland defense communities – making airborne video surveillance crucial to operational success, no matter where. Deployed troops in Afghanistan need to be able to determine if mountainous or urban areas are safe for transport. Homeland security agents responsible for monitoring thousands of border miles need to be able to communicate information regarding illegal crossings and drug enforcement, to name just a few examples. In these and many other scenarios, airborne video surveillance has become essential to help keep troops and public servants safe, while improving the efficiency and effectiveness of communications from the air…and ensuring mission success.

Why Satellite Communications in the Air?
Domestic and international agencies are increasingly deploying airborne video surveillance applications to aid in a variety of missions, such as national disaster assessment, homeland defense and military ISR, including using unmanned aerial vehicles (UAVs). In all cases, only satellite networks can provide unconstrained coverage over land and water, eclipsing limitations of ground-based communication systems – a key requirement for airborne systems operating anywhere. Additionally, airborne satellite platforms can operate at any altitude, an important consideration for airline carriers avoiding weather systems or military aircraft evading detection.

Yet, despite these advantages, past implementations of airborne satellite platforms at L-band frequencies suffered from low-data rates, overcrowding, and high costs. Enter today’s latest Ku- and Ka-band commercial-off-the-shelf (COTS) satellite solutions—which eliminate these issues. As a case in point, the Hughes HX Airborne platform delivers high-speed data capabilities for commercial and military applications in a standards-based, cost-effective package available now. Some of the key challenges the authors encountered in designing this platform are now detailed... 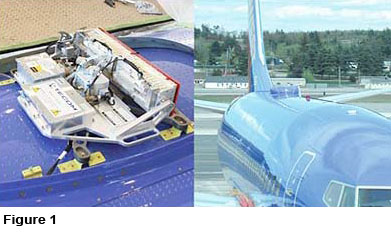 600 mph (1000 km/hr) Tracking Antenna
One of the main challenges that must be overcome in any airborne implementation is the fact that the antenna is in constant motion, upwards of 600 miles per hour (1000 km/hr). This requires dynamic re-pointing to track the satellite. In the commercially available Hughes HX System, a high-performance, very small aperture terminal (VSAT) is deployed onboard. Comprising a compact router and sub-meter size antenna, the first problem faced was the mechanical limitation as to how low, in relation to the horizon, could the satellite be tracked. Current satellite coverage footprints are calculated based on the abilities of ground-based terminals, which can readily be pointed to a specific satellite. A single pointing isn’t sufficient on an aircraft which can move across multiple satellite footprints. During a given flight over the continental United States, for example, a Ku-band VSAT terminal needs to seamlessly switch between three different satellites without breaking connectivity and thus not disrupting critical applications. As illustrated in Figure 1, a compact antenna tracking platform and radome cover was developed and is currently deployed by a commercial customer on Boeing 737 aircraft.

From Satellite to Satellite
Coverage of geostationary satellites can span thousands of miles, and ground-based satellite terminals only require configuration with a single satellite. This is not the case for airborne platforms, which can move in and out of as many as three satellite footprints in a single flight. In the onboard Hughes HX terminal, mobility support information is received from five separate satellite gateways, each enabling service on a different satellite. By backhauling the management of traffic on the system, a single platform was able to be designed which tracks the position of an aircraft as it switches from one gateway’s coverage area into another, and dynamically establishes new connections.

An Unbroken Link
There is nothing more frustrating to a user and more potentially disruptive to a mission than losing connectivity — even temporarily, let alone being kicked offline. As we worked on the switching capability in the Hughes HX terminal, a key issue was to eliminate the downtime while the terminal switches from one satellite to the next. This was resolved by employing Performance Enhancing Proxy (PEP) technology. During a gateway switch, the underlying transmission channel is dynamically torn down and then reestablished through a new gateway without disrupting the TCP connection to the Internet. The net effect is to preserve the end-user’s connection and minimize impact on system operation.

The “Just Work” Standard
At a recent technology conference, a high-ranking military official said that the new generation of IT leaders expects technology to “just work.” Configuring and reconfiguring, or updating and re-installing, whether it comes to software or hardware, is becoming a thing of the past. Not only does technology need to “just work,” it also needs to “just work together.” That’s the standard we applied in building the Hughes HX Airborne solution; because interoperability is not just an issue when it comes to upgrades, it’s also an issue when it comes to initial adoption and continued adaptation in an ever-changing technology ecosystem. The video and audio encoders employed are able to produce standard IP data packets over an Ethernet interface, and the HX satellite router itself is IP compatible. What’s more, the commercially available HX platform provides a common solution for land-mobile, maritime, fixed, and airborne terminals, which can all participate seamlessly in the same operational network — a capability uniquely positioned for national defense operations.

Airborne Demonstration
In recent airborne testing, the Hughes HX solution delivered peak data rates of 2 Mbps, allowing real-time video imagery to be streamed while the aircraft performed at various bank angles, in loops and figure-eights over both land and sea. The platform provided 98 percent availability at level flight and 95 percent availability at banking angles up to 15 degrees. These positive results demonstrate that airborne COTS technology can meet the demands of both commercial and government needs, providing a high-speed broadband solution for any airborne deployment.

Welcome to the world of airborne broadband.

Dr. Rajeev Gopal leads commercial satellite communications and cyber initiatives within the Hughes Defense and Intelligences Systems Division (DISD).  He is the Hughes principal investigator of Hughes/DISA CRADA (Cooperative Research and Development Agreement) on net-centric evaluation of the RSM-A regenerative satellite mesh technology. He earlier served as the network system engineering lead for a USAF TSAT space segment alliance and was on the SPACEWAY® 3 system architecture and Mobile Satellite systems (Thuraya, ICO) development teams. He also served as the chief architect and software manager for development of the SPACEWAY Network Operations Control Center. Dr. Gopal is a member of the Cyber Security best practices working group of the FCC’s Communications Security, Reliability and Interoperability Council (CSRIC). As a member of the US President’s NSTAC Satellite Task Force, he participated in the development of the NSTAC STF 2009 report on commercial satellite communications security. He serves on several program committees, including IEEE Globecom SAC, SPIE, and IEEE SIMA and has been on panels organized by Satellite Industry Association and National Institutes of Health.

Dan Losada is a Senior Director of the Defense and Intelligence Division at Hughes. He is responsible for Department of Defense programs, covering all their product lines. Recently, he has been working on C4 programs in support of all branches of the Military during their transition to IP based broadband systems with a Net-Centric vision.