Typically, the spectrum of terminals that we produce are anywhere from very small terminals that will operate on Class II and Class III UAVs, up to our largest terminal, which we call our Milli H or Milli HI. And that terminal is typically used for military land-based vehicles and Roll-On/Roll-Off requirements for special operation forces in the U.S. military. We are also seeing this terminal being installed on military maritime vessels around the world.

Primarily, our company prioritizes the development and manufacture of onthe- move terminals. We are also in the process of bringing to market our newest development efforts, which are Ka- and Ku-, Electronically-Steerable Array (ESA) antennas. These are for services such as mPOWER, O3b Classic and other LEO and MEO architectures. 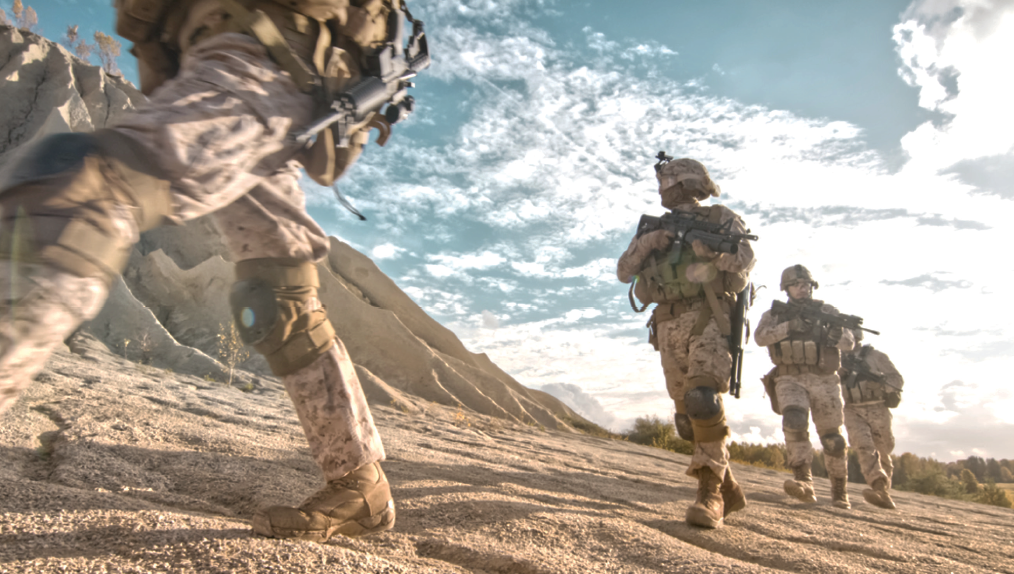 GSR
Why are small form-factor satellite terminals important for military users today? What trends are we seeing in the military that are driving a need for connectivity at the tactical edge? 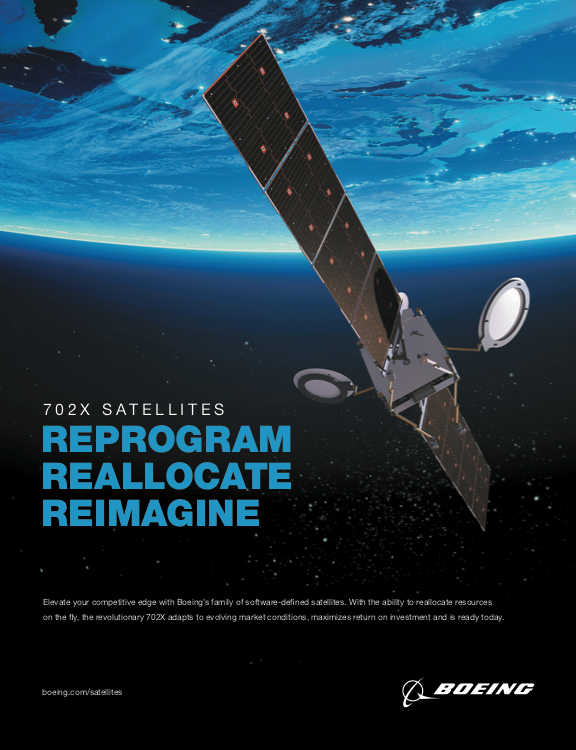 Jason Stephens
At the very Forward Line Of Troops (FLOT), you see a requirement for a huge amount of data exfiltration and infiltration, whether it be intelligence, surveillance, reconnaissance (ISR), personal location information (PLI), or video streaming services. We are to the point where the Department of Defense (DoD) is operating with surgical strike attack capability. Sometimes those approvals are at the very forward edge, coming from headquarters or other locations around the world. You may have someone in the U.S. commanding a task force operating in the Middle East, Eastern Europe or the Pacific. And those approvals are coming from information that is being exfiltrated back to locations in the U.S. headquarters or around the world. The decisionmaking processes on whether to continue forward with a mission are happening in real-time. That real-time decision-making is only capable of happening with the data exfiltration and the data infiltration that is required at the FLOT.

What we’re seeing at the FLOT is a requirement to go faster, smaller, lighter, with less power draw. There’s no opportunity at the tactical edge to stop, pause, bring up a terminal, and spend 45 minutes bringing a land-based or a traditional parabolic terminal up onto the network.

With the requirement of that data exfiltration and data infiltration for the command and control of those troops, you’re seeing exponential growth in small form-factor, on-the-move requirements for our U.S. DoD customers and military ministries of defense around the world.

Mike Blefko
To supplement what Jason is saying regarding the terminals, that’s essentially where the satellite companies like SES are heading as well. Our goal is to provide that air interface link in real-time to those terminals in the field at the tactical edge, with highthroughput and—ideally—low-latency connections. This is so they can essentially execute all those applications, all that analysis, and have the information available in real-time for both our existing O3b and our new constellation mPOWER that is going up.

O3b Classic, our MEO constellation of 20 satellites, does this very well today. But we have a limited number of beams on orbit. As we go into mPOWER, we’ll have a huge paradigm shift in the number of beams that go up that could essentially point to all those individual GetSat terminals that get deployed on the ground. We are really looking forward to that jump in capability as we move into our next generation of mPOWER.

GSR
With terminals such as GetSat’s MICRO SAT and Milli SAT deployed on military vehicles, what kinds of capabilities, solutions, and applications could the military make available to the warfighter?

Jason Stephens
The key here is to understand the exponential increase in data rate capabilities with mPOWER in small form-factor terminals. With the commissioning of mPOWER, and the qualification of terminals the size of MICRO SAT or Milli SAT on mPOWER, and the expected data rates that we are going to see over the mPOWER constellation with these small-form-factor terminals, [users] will have the ability to [perform] command and control functions from a vehicle.

They’ll be able to push and pull real-time ISR, messaging, direct action approvals, and direct action planning material to-and-from the battlefield without having to pause and set up communications to exfiltrate that data — effectively enabling true COTM.

GSR
What new technologies or advancements in military solutions will this enable them to use? What advanced capabilities will this bring to the warfighter?

Jason Stephens
Everything. It would be everything. You’re opening up a complete capability that hasn’t been there previously. Previously with FLOT, if you did 256K or 512K or 1 MB full-duplex in the return, it was an accomplishment. With mPOWER and the small form-factor terminals, these terminals will enable comms on the move and do 20, 30, 40 MB forward and return. So, you’re opening the architecture of “anything is possible” at the forward edge.

Mike Blefko
Prior to that type of capacity — with those types of data rates Jason just mentioned — if there was a large file that needed to be transferred in the gigabyte range over a GEO satellite and large reflector parabolic-like antenna, it could take hours — if not days — to send really large files with that connection architecture. Many times, military users would essentially pull hard drives out of computers and transport them by helicopter, as that was more efficient than over a satellite network. With the smaller terminals and the higher data rates, not only do these large 100 gigabyte or terabyte files send out in hours, these gigabyte files that get sent back and forth no longer have to be compressed or scaled back. If they’re going from the tactical edge to some analytic center, it can be sent in real-time and analyzed in real-time, enabling real-time decision-making on the ground.

Then there are the advanced solutions making their way into the battlefield —things such as AR goggles and heads-up displays. You would need a robust connection to look at some sort of simulator or some sort of situational awareness in real-time. As Jason mentioned, if small-form-factor terminals deliver 500 K to 1 Mb, they were doing pretty well. We can get anywhere from 30- to 0 Mb duplex data rates today.

We’ve recently deployed this type of technology to maritime vessels. On maritime vessels, especially on hospital ships such as Mercy and Comfort, they were looking for it to be able to use what is called a DaVinci machine. This is a medical machine where a doctor at a land-based location can perform an operation at sea, all done remotely. This is managed by using a highthroughput, low-latency link over a GetSat terminal that delivers the link.

It has such a quick response time and feedback overtop of the network. They can do a precise, lifesaving operation in the field if the operation could not be delayed for the person who is injured to be returned back to a land-based hospital. That type of capability exists today. Whether it be a simulator or a real-time situational awareness, or medical capability to help the warfighter in the field, all those types of applications are enabled.

Jason Stephens
The telemedicine requirement for the U.S. military has grown exponentially over the last three to five years. As Mike mentioned with the DaVinci machine and the hospital ships, it’s not only on those vessels, but also at the forward edge. We have medical personnel at the forward edge, and there is a huge requirement for bandwidth to support telemedicine to ensure that injured troops will receive the proper procedures with the proper guidance.

Additionally, from a warfighter perspective, we are seeing exponential growth in unmanned land-based vessels and unmanned surface vessels for maritime use. What that’s allowing is for us to reduce risk for soldiers, sailors, and marines. By reducing that risk, we are able to reduce casualties, and, in most cases, we are able to gain more information and intelligence.

Mike Blefko
What the network could handle prior to now was a single feed at a time. The U.S. government has a capability called Unified Video Dissemination Solution (UVDS) that requires multiple video feeds to be sent simultaneously over top of a link. But if you’ve only got a 500 K to 1 Mb link, it’s difficult to execute such a task However, with O3b today, and certainly mPOWER tomorrow, we’ve demonstrated and implemented multiple video feeds. We can go up to six videos over the same video channel. That greatly increases with mPOWER, with respect to the data rates. For additional information on mPOWER and the constellation’s ability to enable comms on the move, select this direct link to download, “O3b mPOWER for U.S. Government Missions.”

This article first appeared on GovSat and is republished with permission of SES and GSR.
ses-gs.com/govsat 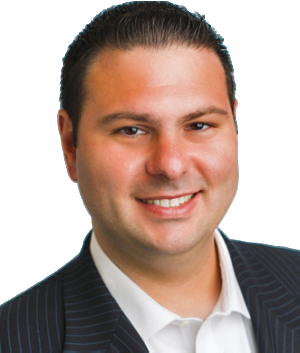 Ryan Schradin is the Executive Editor of GovSat Report. A communications expert and journalist with more than a decade of experience, Ryan has edited and contributed to multiple, popular, online trade publications that are focused on government technology, satellite, unified communications and network infrastructure.