When speaking with very small aperture terminal (VSAT) end-users and obtaining their feedback on what’s most important in next-generation technology, surprisingly, spectral efficiency and higher data rates do not top the list.

Almost universally, Size, Weight and Power (SWaP) are the biggest concerns. In fact, given the proliferation of man-portable terminals and the advent of Beyond Line of Sight (BLOS) communications on Unmanned Aerial Vehicle (UAV) platforms, reduction in SWaP has been the driving factor in all new VSAT modem designs. Of course, Moore’s law has been our greatest ally in the battle to reduce SWaP. 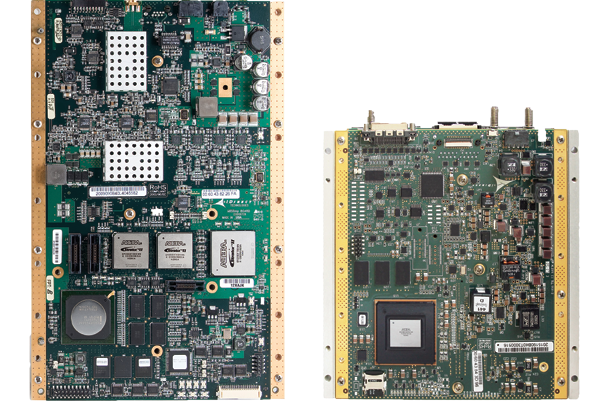 ASIC technology is used in the iDirect 950mp, reducing the size of the original 850mp by 40 percent, as seen in this photo with the e850mp (left) and the 950mp (right). The image is courtesy of iDirect Government.

As the density of electronics on any given chip increases, the footprint of the chip will decrease.

Typically, the power consumption of the remote will drop as well. However, to make significant reductions in SWaP more quickly than Moore’s law will allow, new modem architectures must be employed.

Historically, modems have relied heavily on Field Programmable Gate Arrays (FPGAs). These FPGAs serve primarily in modulating and demodulating waveforms as well as calculating Forward Error Correction (FEC). The modems, of course, needed packet processing and other capabilities so a central processing unit (CPU) was also needed in the design.

The use of FPGAs and a separate processor allowed for a very powerful and flexible modem design. FPGAs could be programmed to support any in-bound or out-bound wave desired whether standards based or proprietary. In addition, most of the FPGAs could be upgraded as higher order modulations were developed or more capable FEC algorithms became available.

The flexibility of the FPGAs also allowed for the implementation of some very specific, government-focused features such as Transmission Security (TRANSEC) and anti-jam capabilities to be developed on commercial off-the-shelf communications equipment. 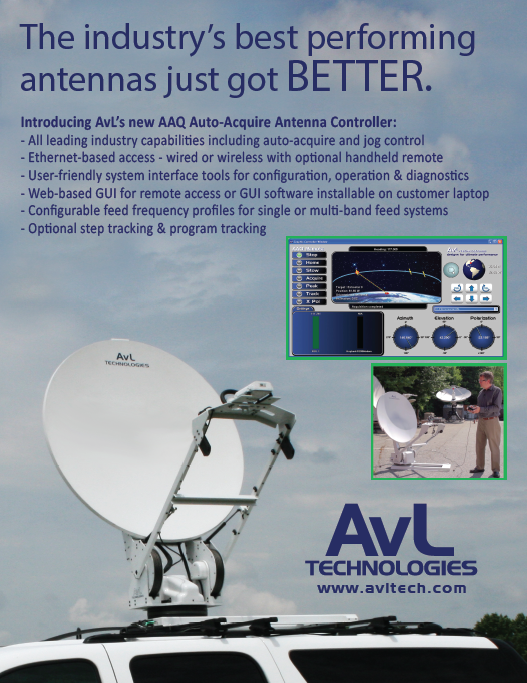 These feature sets are tightly coupled to the waveform and therefore cannot readily be accomplished externally from the modulators and demodulators.

Such flexibility is a great benefit of FPGAs but unfortunately, they are very power hungry. The CPUs could be leveraged to perform any number of tasks. The price paid for all this capability and flexibility was SWaP and cost. Even today, FPGA implementations lead to very high cost of goods sold.

As standards-based waveforms, especially DVB-S2 as an out-bound carrier, became widely adopted, Application Specific Integrated Circuits (ASICs) manufacturers began developing DVB-S2 demodulators primarily for the broadcast TV market. The new DVB-S2 demodulator ASICs were produced in the millions. The DVB-S2 ASICs had hundreds of millions of hours operating in the field and therefore had proven their effectiveness and reliability. Later generation modem designs began incorporating these DVB-S2 demodulators but still relied on FPGAs for in-bound waveforms and separate CPUs for packet processing. Still the cost of goods sold for the remote dropped as did the power consumption.

The advent of System On a Chip (SOC) FPGAs, in which a processor is embedded in the FPGA fabric, eliminated the need for a separate CPU on the board. Eliminating the CPU from the design naturally enabled a decrease in board footprint. However this size savings was only a secondary benefit. By eliminating superfluous calls to a CPU and minimizing the time data spent on the buss dramatically decreased the power consumption of the unit.

In the world of SWaP, size and weight are important but power savings are paramount. This is especially true in the man-portable market. The true weight of a man-portable terminal is not in the terminal itself but the weight is in the batteries. As a point of comparison, a single BB-2590 lithium battery weighs in excess of 3 pounds. As a rough measure, single battery can power a standard terminal for 60 minutes to 90 minutes.

The latest innovation in modem design brings together all aspects of the system and integrates them into a single ASIC. The newest ASICs do not stop at just the demodulator. The newest ASICs incorporate a full RF front end as well as DVB-S2x demodulators and RCSv2 modulators in addition to a CPU and programmable memory.

The new ASICs, unlike the ASICs of the past, allow for programmability to support future feature enhancements and enable true Software Defined Radio (SDR) capabilities. The design and software development for these new ASICs is well under way, and smaller, lighter and more capable remotes will be available very soon.

The reduction in SWaP of satellite modems has been so dramatic over the past few years that a new type of terminal is emerging.

Currently, in most configurations we have an indoor unit, the modem and outdoor radio frequency transmission equipment including the antenna along with the block upconverter (BUC) and low-noise block downconverter (LNB). Improvements in SWaP have enabled a new configuration at the feed-horn. The latest generation of remotes incorporates the BUC, LNB and modem in a single package mounted directly on the antenna. This configuration vastly simplifies installation.

With the new configuration, only CAT 5 Ethernet with power of Ethernet needs to be run to the antenna. With so many architectural changes to satellite routers enabling smaller, more efficient and more flexible configurations, terminal designs are bound to evolve dramatically over the next few years. This coupled with the increased power and bandwidth available on the new High Throughput Satellites (HTS), the proliferation of geo-synchronous satellite communications will continue for years to come.