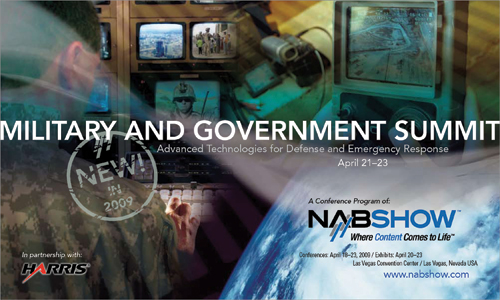 by Susan Sheppard
Today’s military, government and first responders have a need to understand what the commercial broadcast world can offer to better manage their video and imagery requirements. Now, for the first time, the National Association of Broadcasters has teamed with industry and government partners to develop a conference targeted directly at the defense and military markets, at the world’s largest, digital media show — 2009 NAB.
BRIEFING - MilComSats of the USSR/Russia,

by Jos Heyman, Tiros Space Information
In much the same way as the U.S. military forces use communications satellites, the USSR/ Russian military forces are a heavy user of communications satellites. A detailed analysis of the nature of the satellites used by the USSR/Russia indicates, however, that a different approach is taken to meet what essentially is the same objective, taking into account the local requirements.
BRIEFING - Time To Rethink ITARs, 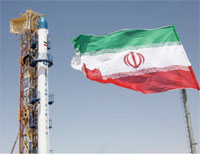 by John Stone, Near Earth LLC
In 1999, under the recommendation of a bipartisan commission headed by California representative Christopher Cox, the United States government instituted a sweeping change in its regulation of satellite and related technology exports.
Briefing - Advanced Milcom on Commercial Sat Systems, 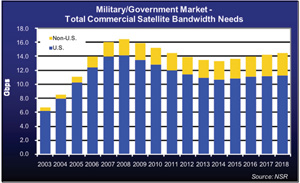 by José del Rosario, NSR
Except for the WGS-1 satellite that was launched in 2007, the current fleet of military communications satellites represents decades-old technology and capabilities. In order to address current as well as emerging requirements for national security objectives, newer and more powerful systems are being developed and deployed by the U.S. Military. These assets include the Wideband Global Satcom (WGS), Advanced EHF satellites (AEHF) and the Mobile User Objective System (MUOS) programs.
BRIEFING - Faster, Higher, Stronger..., A Theme for Military Communications, Not Just Olympic Athletes

by Andrea Maléter
In recent years defense organizations around the world, led by the U.S. DOD, have been pursuing the means to achieve “net-centric warfare”, in other words a fully interconnected battlespace with all forces communicating on an integrated, IP-based network. Net-centricity requires seamless communications, and thus the search for ways to increase the speed, bandwidth and power of communications across the battlespace, from ground to air and back, has driven R&D and implementation budgets for true broadband on-the-move capabilities.
BRIEFING- ISCe 2009 SATCOM Conference Is Revealing,
The Military — NGOs — First Responders — Government Agencies — all require secure and viable access to SATCOM solutions in order to respond to their crucial missions with success. Such is becoming increasingly difficult to ensure — SATCOM environs continue to change as new technologies and new processes are brought into play, capacity is hard to acquire, and increasing costs can play havoc with budgets. How can one update their knowledge as to these changes, quickly and effectively?
BRIEFING - SATCOM Adoption by the Military,
Karl G. Fuchs is Director of Engineering for iDirect Government Technologies (iGT). Fuchs leads iGT’s team of federal systems engineers and serves as chief architect for new product integration as well as the chief technical resource.
COMMAND CENTER
COMMAND CENTER - Robert Osterhaler, CEO, Americom GS,

From earning a BS in Economics from the U.S. Air Force Academy, to the receipt of an MBA from Texas A&M University, Robert Tipton (Tip) Osterhaler has served both his country as a Brigadier General in the U.S.A.F. to becoming the CEO of AMERICOM Government Services (AGS) in 2006. The company moved from a product oriented sales channel into an end-to-end satellite solutions company under his guidance, and focuses on the needs of U.S. government clients. AGS is a wholly-owned subsidiary of SES.
COMMAND CENTER - Admiral (Ret.) Yossi Levy, Orbit Technology Group,

The dynamic Vice President of Orbit Technology Group is a retired Admiral who served in the Israeli Navy and, most recently, as Israel’s Deputy Chief of the Navy. Mr. Yossi Levy joined Orbit as Vice President Business Development in 2005. He added sales and marketing to his responsibilities in 2006 and has been deeply involved with SATCOM for decades. Prior to joining Orbit, Mr. Levy held various senior management positions in the public and high tech sectors and has brought to the company his extensive leadership experience and management capabilities.
COMMAND CENTER - William Hartwell, G.M. + Sr. Director Riverbed,

William Hartwell leads the Federal Markets Division at Riverbed Technology and is responsible for driving the Company’s products and services for WAN Optimization and Application Acceleration into Federal Civilian Agencies, the Department of Defense, and the Intelligence Community.
COMMAND CENTER - Colonel Patrick H. Rayermann, COMM-fio, NSSO,

Colonel Rayermann was raised in Southern California and started his professional life as an employee of the Jet Propulsion Laboratory. In 1981, he graduated from UCLA and its ROTC program with a BS degree in physics and a commission as a 2nd Lt. in the United States Army Signal Corps. As a company grade officer, he served as an assistant project manager at Ft. Monmouth, New Jersey, then as a planning officer with the 7th Signal Brigade and as the Commander of A Co, 44th Signal Battalion, which used the TRI-TAC communications system he helped to develop. He deployed to Northern Iraq as part of Operation Provide Comfort.
COMM OPS
COMM OPS - Going Down Under for Afghan Satcom Support,

by Marc LeGare, CEO, Proactive Communications, Inc.
Although Iraq has overshadowed Afghanistan in terms of Coalition resource investment, that has all changed with the new U.S. Administration — communications resources that support that area are now at a premium. In light of this shift in focus, the dilemma at PCI became how to expand our satellite coverage capacity for our customers while still being postured for changes.
COMM OPS - Winning Ways For Servicesat,
January 31st 2009, was a proud day for Servicesat. Just 12 months after being approached by one of Iraq’s largest TV stations, Servicesat was able to deliver an original, tailor made, low-cost digital broadcasting solution enabling one of the largest TV stations in Iraq to broadcast LIVE in five Iraqi provinces the entire day throughout the Iraqi elections.

ON TARGET
ON TARGET - Ka-band Linear Amp Selection for WGS, 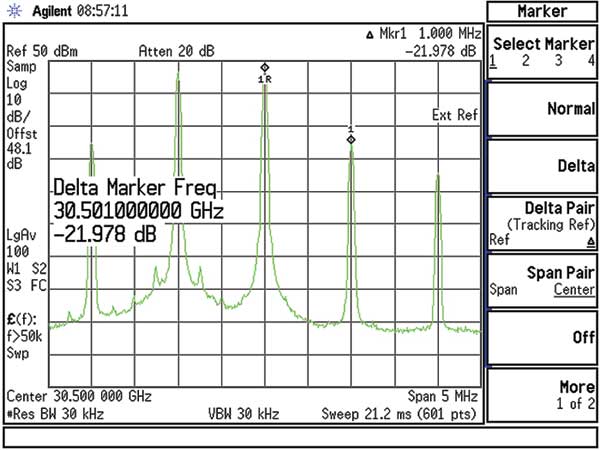 Military Satcom network engineers need to consider non linear effects of transmissions where signal levels are low or multiple carriers occupy a narrow bandwidth. Non linear characteristics of some Ka-band amplifiers’ behavior reacts differently to Ku-band and X-band amplifiers, and therefore there is a need to carefully measure the performance of Ka-band amplifiers when selecting for use on Wideband Global SATCOM (WGS).
ON TARGET - Operating XMPP over Radio + Satellite Networks, 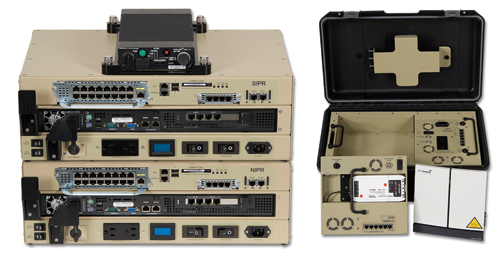 by Rick Lober, G.M., DISD, Hughes Network Systems
Commercial-Off-The-Shelf (COTS)-based satellite communications solutions add to the speed, ubiquity, flexibility, and security of the net-centric enterprise and development of the Global Information Grid (GIG). Most importantly, COTS-based solutions ensure that whether on the ground in Afghanistan, in international air space or managing operations from the Pentagon, the warfighter remains connected — receiving and sharing the information needed to safeguard U.S. interests.